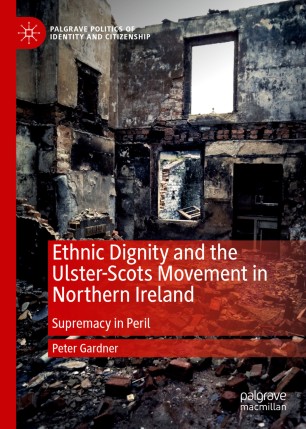 Ethnic Dignity and the Ulster-Scots Movement in Northern Ireland

In the wake of conflict, perceived loss, and the granting of concessions to the historically dominated, notions of culture, ethnicity, language and heritage offer a space for a re-writing of their story. However, such re-writing often involves erasures, additions and reconceptualisations that reproduce systems of structural violence and preclude engagement with the history of domination.

After introducing the concept of ethnic dignity and locating its place within post-conflict identity politics, Gardner focuses his analysis on the Ulster- Scots story of peoplehood. Drawing on a wealth of primary data, the chapters explore a variety of core issues including ethnopolitics, social class, political-economic ideology, colonialism, and heteromasculinity.

The book concludes by taking a global view of post-conflict ethnic dignity among the once dominant, analysing the New Afrikaans movement in South Africa, white pride and ethnic whiteness studies, and Maronite Phoenicianism in Lebanon.

This will be an important contribution for students and scholars of ethnicity, divided societies and, more broadly, political sociology.

Peter Gardner is Lecturer in Sociology at the University of York, UK.