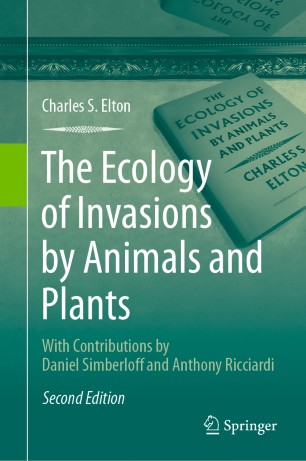 The Ecology of Invasions by Animals and Plants

Charles S. Elton’s classic text Ecology of Invasions by Animals and Plants sounded an early warning about a human-driven global change that became widely appreciated among scientists and the public only decades later. "We must make no mistake", he wrote. "We are seeing one of the great historical convulsions of the world's fauna and flora." The enormous environmental consequences of this phenomenon are now well recognized. The past 60 years have seen an exponential rise in research on biological invasions, and Elton’s original hypotheses are among those at the center of this research.

In this new annotated edition, ecologists Daniel Simberloff and Anthony Ricciardi have provided forewords placing each chapter into historical scientific context. They assess the influence of Elton’s ideas on the development of invasion ecology. Moreover, using the author’s notes from the Elton archives at the University of Oxford, Simberloff and Ricciardi offer evidence that Elton was preparing the groundwork for a revised edition and discuss what additions and changes he intended to make.

With clear language and copious examples, Ecology of Invasions is the first book to place invasions in a global context and is still the most cited work on the subject. It is an essential reference for students, researchers, and the general public who wish to understand an environmental phenomenon that has grown in magnitude and scope as a global issue for conservation and biosecurity.

Charles S. Elton (1900 – 1991) is widely considered the founder of animal ecology. He established and led Oxford University’s Bureau of Animal Population, responsible for training zoologists from around the world. His scientific legacy, of which Ecology of Invasions is a major part, has influenced generations of biologists.

Daniel Simberloff is the Nancy Gore Hunger Professor of Environmental Studies at the University of Tennessee, member of the U.S. National Academy of Sciences, and Editor-in-Chief of the journal Biological Invasions.

Anthony Ricciardi is Professor of Biology in the Redpath Museum and McGill School of Environment, and a Trottier Fellow in Science and Public Policy, at McGill University.  He has served on the editorial boards of the journals Biological Invasions, Diversity and Distributions, and NeoBiota.