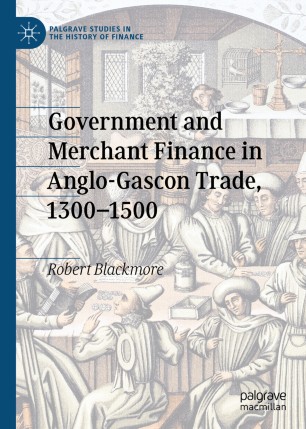 The Late Middle Ages (c.1300–c.1500) saw the development of many of the key economic institutions of the modern unitary nation-state in Europe. After the ‘commercial revolution’ of the thirteenth century, taxes on trade became increasingly significant contributors to government finances, and as such there were ever greater efforts to control the flow of goods and money.

This book presents a case study of the commercial and financial links between the kingdom of England and the duchy of Aquitaine across the late-medieval period, with a special emphasis on the role of the English Plantagenet government that had ruled both in a political union since 1154. It establishes a strong connection between fluctuations in commodity markets, large monetary flows and unstable financial markets, most notably in trade credit and equity partnerships.

It shows how the economic relationship deteriorated under the many exogenous shocks of the period, the wars, plagues and famines, as well as politically motivated regulatory intervention. Despite frequent efforts to innovate in response, both merchants and governments experienced a series of protracted financial crises that presaged the break-up of the union of kingdom and duchy in 1453, with the latter’s conquest by the French crown. Of particular interest to scholars of the late-medieval European economy, this book will also appeal to those researching wider economic or financial history.

Robert Blackmore is an economic historian specialising in trade and finance in the Late Middle Ages. He was awarded his PhD in 2018 by the University of Southampton, UK, for his doctoral thesis ‘The Political Economy of the Anglo-Gascon Wine Trade, c.1348–c.1453'.

“This compelling analysis of the commercial and fiscal impact of the political union of England and Aquitaine in the late middle ages offers new data drawn from a wide range of archival sources, as well as challenges to traditional interpretations that have underplayed the key role of financial institutions and commodity markets, notably wine, in shaping political ties. Especially valuable are the new insights provided about the multi-faceted relationship between financial and political capital that worked to create and then weaken the bonds between England and the duchy.” (Maryanne Kowaleski, Joseph Fitzpatrick S.J. Distinguished Professor of History and Medieval Studies, Fordham University, USA)
Buy options