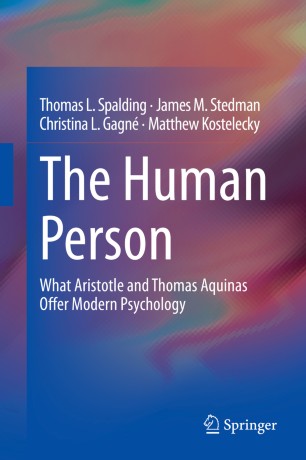 This book introduces the Aristotelian-Thomistic view of the human person to a contemporary audience, and reviews the ways in which this view could provide a philosophically sound foundation for modern psychology. The book presents the current state of psychology and offers critiques of the current philosophical foundations. In its presentation of the fundamental metaphysical commitments of the Aristotelian-Thomistic view, it places the human being within the broader understanding of the world.

Thomas L. Spalding is a Professor in the Department of Psychology and the Associate Dean Graduate Studies in the Faculty of Arts at the University of Alberta. His research focuses on the psychology of concepts and the relation between the human conceptual and language systems and has been funded by the Natural Science and Engineering Research Council of Canada (NSERC), as well as the Social Sciences and Humanities Research Council of Canada (SSHRC). He is the author of over 65 journal articles and book chapters and over 100 conference presentations and invited talks.

James M. Stedman is a Clinical Professor in the Department of Psychiatry, University of Texas, Health Science Center at San Antonio. He has written on an array of topics in psychology, including child clinical pathology and treatment, education in clinical and counseling psychology, and application of Aristotelian Thomistic philosophy to modern psychology.

Christina L. Gagné is a Professor in the Department of Psychology at the University of Alberta. Her work focuses on the human conceptual system and compositionality/productivity within the conceptual system and language system.  Dr. Gagné’s research is funded by the Natural Sciences and Engineering Research Council (NSERC) and Social Sciences and Humanities Research Council (SSHRC) and she has been the author on over 70 book chapters and journal articles and over 100 conference presentations and invited talks.  She has served on several editorial boards and is an associate editor of The Oxford Research Encyclopedia of Morphology.

Matthew Kostelecky is an Associate Professor, Philosophy, at St. Joseph’s College at the University of Alberta. He works on the history of philosophy with a particular focus on medieval metaphysics and cognitive theory. He is the author of multiple articles on the metaphysics of Thomas Aquinas, his sources, and his larger context. Additionally, he is the author of Thomas Aquinas’s Summa contra gentiles: a mirror of human nature, a monograph that disentangles the role and method of metaphysics from the other sciences in Thomas Aquinas’s thought, while simultaneously presenting his account of human nature.