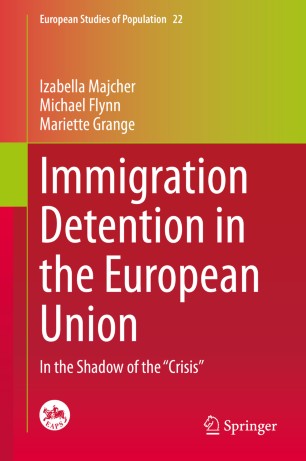 Immigration Detention in the European Union

In the Shadow of the “Crisis”

This book offers a unique comparative assessment of the evolution of immigration detention systems in European Union member states since the onset of the “refugee crisis.” By applying an analytical framework premised on international human rights law in assessing domestic detention regimes, the book reveals the extent to which EU legislation has led to the adoption of laws and practices that may disregard fundamental rights and standards. While emphasizing policies and laws adopted in response to the “refugee crisis,” the volume also shows how these policies have evolved—and in many cases grown more restrictive—even as the “crisis” has begun to recede from the borders of many European countries. To sharpen awareness of contrasting developments across the region, the book’s country chapters are organised into geographic sections that reveal how variations in migration pressures have in some cases resulted in contrasting detention practices even as the EU directives have sought to harmonise immigration laws. A critical focus of the book are the evolving domestic norms related to grounds for detention, length of detention, non-custodial "alternatives to detention," the treatment of children, and conditions of detention. With its systematic and comparative assessment of immigration detention regimes across the EU, the book will be helpful for both academics and practitioners who seek a comprehensive guide to the evolution of one of today’s more important human rights dilemmas—states’ efforts to control global migration.

Dr. Izabella Majcher, Researcher at the Global Detention Project, focuses on the international legal framework governing immigration detention and detention regimes in mainly European Union and Latin American countries. Izabella is also a member of the Ligue suisse des droits de l’homme's visitation teams to Geneva immigration detention centres. She holds a PhD in International Law from the Graduate Institute of International and Development Studies (IHEID) in Geneva. Her doctoral dissertation, which has been accepted for publication by Brill/Nijhoff, assesses the European Union’s policies targeting undocumented migrants and their compatibility with international human rights law.

Dr. Michael Flynn, Executive Director of the Global Detention Project, holds a BA in Philosophy from DePaul University and a PhD in International Studies from the Graduate Institute of International and Development Studies. Flynn previously worked as a project director at the Institute for Policy Studies in Washington, D.C.; as a project coordinator at the Graduate Institute’s Programme for the Study of Global Migration; and as an associate editor of the Bulletin of the Atomic Scientists. He is co-author most recently of the volume Challenging Immigration Detention: Academics, Activists, and Policy-makers (Edward Elgar 2017).  Mariette Grange, Senior Researcher at the Global Detention Project, is a researcher and human rights practitioner. She co-established the Amnesty International office to the United Nations in Geneva and later provided leadership to Human Rights Watch during the institution-building years of the Human Rights Council. She worked on migrants and refugee operations at the World Council of Churches and the International Catholic Migration Commission and on emerging issues at the International Council on Human Rights Policy.