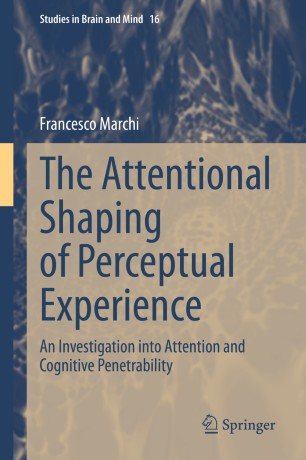 The Attentional Shaping of Perceptual Experience

An Investigation into Attention and Cognitive Penetrability

Part of the Studies in Brain and Mind book series (SIBM, volume 16)

This monograph presents a clear account of when and how attentional processes can shape perceptual experience. This argument is based on the prediction-error minimization model of the mind. The author believes that the topic of attention should take a more central role in the debate about the influence of cognition on perception. Inside, he shows how this can be possible.

The book provides an overview of the cognitive penetrability debate. The author discusses evidence that supports the occurrence of this phenomenon. Overall, this investigation offers readers a philosophical discussion of attention based on the biased-competition theory. It argues that attention is a property of mental representations that emerges from a metacognitive competition process.

Francesco Marchi is a research assistant at the chair for Philosophy of Mind in the department of Philosophy II of the Ruhr University of Bochum. He received his PhD in March 2017 with a dissertation about the role of attentional processes in the interaction between cognition and perception. His main interests lay in the Philosophy of Mind and Cognitive Science, Predictive-Coding models of cognition and Epistemology. His published work currently focuses on the cognitive penetrability of perceptual experience and the role of attention in the shaping of experience by cognition.