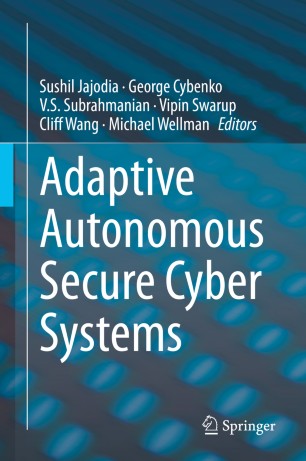 This book explores fundamental scientific problems essential for autonomous cyber defense. Specific areas include:
This book establishes scientific foundations for adaptive autonomous cyber systems and ultimately brings about a more secure and reliable Internet. The recent advances in adaptive cyber defense (ACD) have developed a range of new ACD techniques and methodologies for reasoning in an adaptive environment.
Autonomy in physical and cyber systems promises to revolutionize cyber operations. The ability of autonomous systems to execute at scales, scopes, and tempos exceeding those of humans and human-controlled systems will introduce entirely new types of cyber defense strategies and tactics, especially in highly contested physical and cyber environments. The development and automation of cyber strategies that are responsive to autonomous adversaries pose basic new technical challenges for cyber-security.
This book targets cyber-security professionals and researchers (industry, governments, and military). Advanced-level students in computer science and information systems will also find this book useful as a secondary textbook.

Sushil Jajodia is University Professor, BDM International Professor, and the founding director of Center for Secure Information Systems in the Volgenau School of Engineering at the George Mason University, Fairfax, Virginia. His research interests include security, privacy, databases, and distributed systems. He has authored or coauthored seven books, edited 43 books and conference proceedings, and published more than 450 technical papers in the refereed journals and conference proceedings. He is also a holder of seventeen patents.
George Cybenko is the Dorothy and Walter Gramm Professor of Engineering at Dartmouth. Professor Cybenko has made key research contributions in signal processing, neural computing, parallel processing and computational behavioral analysis. He was the Founding Editor-in-Chief of IEEE/AIP Computing in Science and Engineering and IEEE Security & Privacy. Professor Cybenko is a Fellow of the IEEE and received his BS (University of Toronto) and PhD (Princeton) degrees in Mathematics.
V.S. Subrahmanian is The Dartmouth College Distinguished Professor in Cybersecurity, Technology, and Society at Dartmouth College.  Prof. Subrahmanian is one of the world leaders in logical reasoning with uncertainty, probabilistic logics, temporal probabilistic logics, and managing huge, heterogeneous databases with incomplete and inconsistent information, and multimedia databases.  He serves on the boards of numerous journals including Science, ACM Transactions on Intelligent Systems & Technology, ACM Transactions on Computational Logic, and IEEE Transactions on Computational Social Systems.
Vipin Swarup is director of the Cyber Resilient Systems at the MITRE Corporation, McLean, VA.  He is the recipient of MITRE’s first Technology Transfer Individual Contribution Award for entrepreneurial leadership and success in transferring MITRE innovations to the government and industry. In the past, he has led many research projects as principal investigator and has published extensively in the cybersecurity literature. He holds a B.Tech. in Computer Science and Engineering from Indian Institute of Technology, Bombay, and an MS and Ph.D. in Computer Science from the University of Illinois at Urbana-Champaign.
Cliff Wang graduated from North Carolina State University with a Ph.D. in computer engineering in 1996.  He has been carrying out research in the area of computer vision, medical imaging, high speed networks, and most recently information security. He has authored around 40 technical papers and 3 Internet standards RFCs. Dr. Wang also served as an editor for nine books and hold three US patents on information security system development. Since 2003, Dr. Wang has been managing extramural research portfolio on information assurance at U.S. Army Research Office. In 2007 he was selected as the director of the computing sciences division at ARO while in the same time managing his program. Dr. Wang also holds adjunct faculty position at both Department of Computer Science and Department of Electrical and Computer Engineering at North Carolina State University.
Michael Wellman is Professor of Computer Science & Engineering at the University of Michigan. He received a PhD from the Massachusetts Institute of Technology in 1988 for his work in qualitative probabilistic reasoning and decision-theoretic planning. From 1988 to 1992, Wellman conducted research in these areas at the USAF’s Wright Laboratory. For the past 25 years, his research has focused on computational market mechanisms and game-theoretic reasoning methods, with applications in electronic commerce, finance, and cyber-security. As Chief Market Technologist for TradingDynamics, Inc., he designed configurable auction technology for dynamic business-to-business commerce. Wellman previously served as Chair of the ACM Special Interest Group on Electronic Commerce (SIGecom), and as Executive Editor of the Journal of Artificial Intelligence Research. He is a Fellow of the Association for the Advancement of Artificial Intelligence and the Association for Computing Machinery.