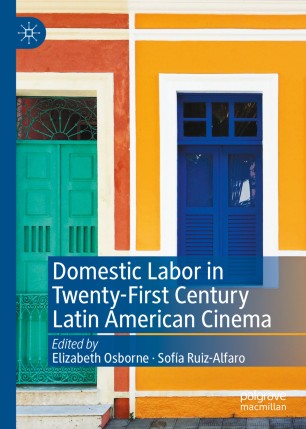 'This is a path-breaking collection that addresses the saliency of “domestic work” in contemporary Latin American cinema. Through its well-curated essays, the collection contributes to an understanding of the representation of domestic work and workers in relationship to affect and emotion, space and place, and agency.'
— Ana M. López, Professor in the Communication Department and Associate Provost, Tulane University, USA

'This is the first book to explore the representation of domestic workers in Latin American cinema of the 21st century. There is a growing genre of fascinating films that feature the domestic worker across Latin America and this edited book is timely, well researched and illuminating. This is an essential volume for anyone who wants to understand the figure of the domestic worker and how she has been seen in recent Latin America cinema.'
—  Deborah Shaw, Professor of Film and Screen Studies, University of Portsmouth, UK

'If there still remains one sociocultural constant among the diverse societies of Latin America, it is the domestic servant. Even into the twenty-first, as the studies presented in this volume, the domestic servant plays a role that, no matter how things change with the latest versions of modernity, her absence would bring down the social narrative.'
— David William Foster, Regents Professor of Spanish and Women and Gender Studies, Arizona State University, USA

Traditionally, paid domestic workers have been marginalized in Latin American cinema. Since 2000, however, a number of recent films have questioned this historical marginalization of domestic employment by making these workers the center of their narratives. Domestic Labor in Twenty-First Century Latin American Cinema provides the first in-depth exploration of the representation of domestic labor in recent Latin American films. This edited volume examines both feature and documentary films that focus on the doméstica as an emergent subject that challenges hierarchical power structures within the household. Each chapter sheds light on how domestic workers respond to economic, social, political, and cultural anxieties and tensions.

Sofía Ruiz-Alfaro, PhD, is Associate Professor in the Department of Spanish and Linguistics, Franklin and Marshall College, USA.