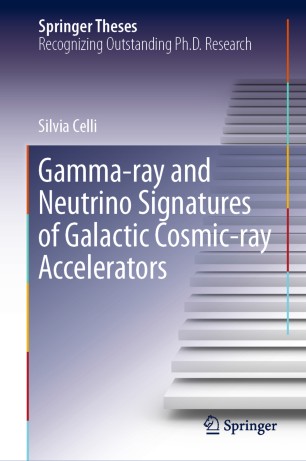 This book addresses three “hot” topics concerning the general problem of the origin of Galactic cosmic rays, namely (1) the acceleration, propagation, and radiation of particles in supernova remnants; (2) very high energy neutrinos from the Galactic Center; and (3) the potential held by the next-generation gamma-ray and neutrino detectors CTA and KM3NeT for studying extended non-thermal sources in the Galaxy. The topics are intrinsically connected to determining the nature (“hadronic or leptonic?”) of gamma-ray emissions from young and middle-aged supernova remnants and the search for cosmic-ray PeVatrons. The results and conclusions provided here are based on extensive analytical and numerical simulations, which are formulated and presented in a straightforward format that can be readily used in the interpretations of gamma-ray and neutrino observations, as well as for confident predictions for future measurements.

Silvia Celli received her Ph.D. in Astroparticle Physics from Gran Sasso Science Institute in 2019. Later, she has been working as a researcher at the Max-Planck-Institut für Kernphysik in Heidelberg (Germany). Her main research interests are related to the high-energy emissions of astrophysical sources in the multi-messenger framework, in particular to the gamma-ray and neutrino signatures of Galactic cosmic-ray accelerators. She is a member of three large international scientific collaborations, namely ANTARES, CTA, and KM3NeT.