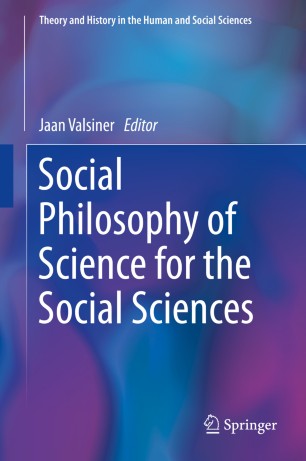 Social Philosophy of Science for the Social Sciences

This is an international and interdisciplinary volume that provides a new look at general background of the social sciences from a philosophical perspective and provides directions for methodology. It seeks to overcome the limitations of the traditional treatises of a philosophy of science rooted in the physical sciences, as well as extend the coverage of basic science to intentional and socially normative features of the social sciences.

The discussions included in this book are divided into four thematic sections:

Social Philosophy of Science for the Social Sciences will find an interested audience in students of the philosophy of science and social sciences. It will also relevant for researchers and students in the fields of psychology, sociology, economics, anthropology, education, and political science.

Jaan Valsiner is a cultural psychologist with a consistently developmental axiomatic base that is brought to analyses of any psychological or social phenomena. He is the founding editor (1995) of the Sage journal, Culture & Psychology. And Editor-in-Chief of Springer’s Integrative Psychological and Behavioral Science. He has been Niels Bohr Professor of Cultural Psychology at Aalborg University, Denmark in 2013-2018 and Professeur invitee at University of Luxembourg (2013-2019).  He has published and edited around 50 books, the most pertinent of which are his monographs The guided mind (Cambridge, Ma.: Harvard University Press, 1998),  Culture in minds and societies (New Delhi: Sage, 2007), and Ornamented Lives (Charlotte NC: Information Age, 2019).  He has been awarded the Alexander von Humboldt Prize of 1995 in Germany, and the Hans-Kilian-Preis of 2017, for his interdisciplinary work on human development, as well as Senior Fulbright Lecturing Award in Brazil 1995-1997. He has been a visiting professor in Brazil, Japan, Australia, Estonia. Germany, Italy, United Kingdom, and the Netherlands.