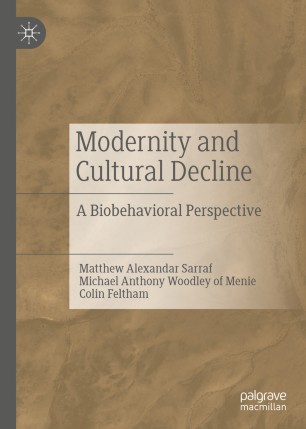 “Modernity and Cultural Decline is a breathtaking scientific analysis of the rise—and now the decline—of Western civilization. We should be interested—and forewarned.” —Seymour Itzkoff, Professor Emeritus of Education, Smith College, USA

“The book puts human nature, genes and evolution back into historiography and sociology. This is the real thing, sharp minds . . . offering testable hypotheses based on quantitative models.”

“A profoundly important book. One can only hope that society finds the will to engage with these vital and consequential ideas.”

“Modernity and Cultural Decline is a supremely bold, thoroughgoing biological account of often unacknowledged . . . negative impacts of modernity. This is the sort of science book of which we need more.”

This book argues that despite the many real advantages that industrial modernity has yielded—including large gains in wealth, longevity, and (possibly) happiness—it has occurred together with the appearance of a variety of serious problems. Chief among these are probable losses in subjective existential purpose and increases in psychopathology. A highly original theory of the ultimate basis of these trends is advanced, which unites prior work in psychometrics and evolutionary science. This theory builds on the social epistasis amplification model to argue that genetic and epigenetic changes in modernizing and modernized populations, stemming from shifts in selective pressures related to industrialization, have lowered human fitness and wellness.