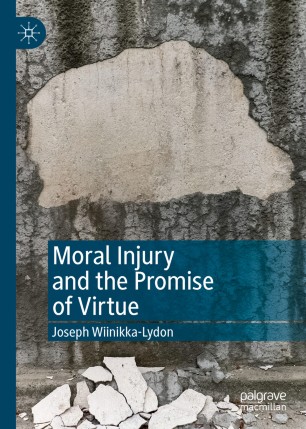 Moral Injury and the Promise of Virtue

“This book brings valuable interdisciplinary insights to the phenomenon of moral injury. Informed by the moral philosophy of Iris Murdoch, Wiinika-Lydon makes a compelling and eloquently argued case for the role of virtue ethics in illuminating aspects of moral injury that are often neglected by social scientific and clinical approaches”
–Maria Antonaccio, Professor of Religion, Bucknell University, USA

“Since coined by the legendary Jonathan Shay, ‘moral injury’ has sparked an interdisciplinary explosion of literature. Joseph Wiinikka-Lydon fills an important gap by addressing the question of what is actually ‘moral’ about ‘moral injury.’ He not only amplifies the complex phenomenon named ‘moral injury,’ but demonstrates how the language of virtue points beyond the moral to the existential.”
–Aristotle Papanikolaou, Professor of Theology, Fordham University, USA

“This book provides the first application of Iris Murdoch's moral philosophy to the field of War Studies and Trauma. Wiinikka-Lydon deftly argues that Murdoch's conception of virtue can not only be helpful, but vital, in providing a route to both reflectiveness and compassion.”

This book turns to virtue language as an important resource for understanding moral injury, a form of subjectivity where one feels they can no longer strive to be good as a result of wartime experience. Drawing specifically on Iris Murdoch’s moral philosophy, and examining the experiences of civilians during the Bosnian War (1992-5), Joseph Wiinikka-Lydon argues that current research into war and current understandings of subjectivity need new ways to articulate the moral dimension of being a subject if we are to understand how violence affects one’s moral being and development. He develops an understanding of the human person as a tensile moral subject, one that forefronts the moral challenges and vulnerability inherent in lives affected by war. With these resources, Wiinikka-Lydon argues for a moral vocabulary and images of the human as a moral being that can better articulate the experience of violence and moral injury.