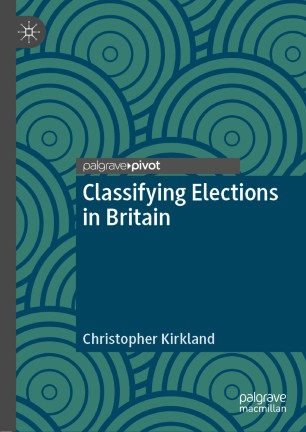 ‘This excellent book provides a very timely examination of the different types of elections in post-devolution Britain, and how these are viewed by the parties, the media, and voters themselves. Kirkland offers an up-to-date and nuanced account of the orthodox distinction between first-order and second-order elections, noting how this over-simplifies the differences between them and overlooks some similarities. In so doing, he skilfully develops a more refined and relevant framework for classifying elections in Britain today, and evaluating their significance. As such, this book is absolutely essential reading for students and scholars of electoral politics.’

This book seeks to understand and classify differences that exist between a variety of elections in Britain. It moves beyond first- and second-order classifications developed following the European Parliamentary Elections in 1979 to include elections of devolved administrations such as the Scottish Parliament, local mayors or the Police and Crime Commissioner Elections. Drawing upon a range of elections, the book develops a new classification based on the interactions that exist between voters, the media and political parties. In doing so, it argues that alongside voters, political parties and the media can, and do, prioritize certain elections. The author explores the role of each group within elections individually through case studies. The final chapter then offers an overall means of understanding the levels of salience attached to each election.

Christopher Kirkland is Lecturer in Politics at York St. John University, UK. Previous publications include The Political Economy of Britain in Crisis and PCC Elections as a ‘Failed Experiment’: What Lessons can be Learned?