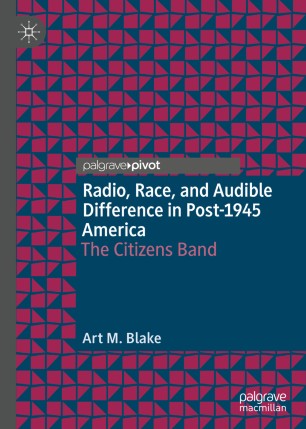 In the second half of the twentieth century, new sounds began to reverberate across the United States. The voices of African-Americans as well as of women, Latinx, queer, and trans people broke through in social movements, street protests, and in media stories of political and social disruption. Postwar America literally sounded different. This book argues that new technologies and new mobilities sharpened American attention to these audibly coded identities, on the radio, on the streets and highways, in new music, and on television. Covering the Puerto Rican migration to New York in the 1950s, the varying uses of CB radio by white and African American citizens in the 1970s, and the emergence of audible queerness, Art M. Blake attunes us to the sounds of race, mobility, and audible difference. As he argues, marginalized groups disrupted the postwar machine age by using new media technologies to make themselves heard.

Art M. Blake is Associate Professor of History and a faculty member in the Communication and Culture graduate program at Ryerson University, Canada.

“A standout study. At a time when media historians remain fixated on pre-1950s media, Blake reminds us of what CB radio represented for black and white communities during the 1970s. A smart, incisive, and accessible book on a woefully understudied topic.” (Dolores Inés Casillas, Associate Professor of Chicana and Chicano Studies, UC Santa Barbara, USA)
Buy options