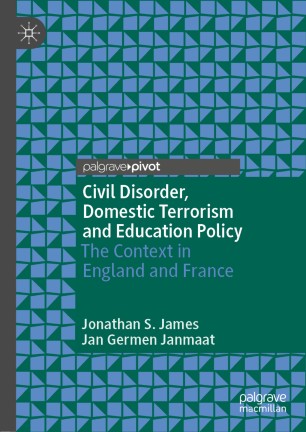 The Context in England and France

“James and Janmaat offer a thorough and well considered analysis of English and French education policy changes in response to the War on Terror. The book highlights the double-speak of assimilation, integration and national values as means to erase difference whilst simultaneously constructing the aberrant enemy ‘Other’ within.”
​—Professor Vini Lander, Leeds Beckett University, UK
This book explores the links between education policy and occurrences of civil disorder and domestic terrorism in England and France. Since 2001, both England and France have experienced outbreaks of rioting in which young people of immigrant origin have been implicated: both have also been the targets of domestic terror attacks perpetrated by their own citizens. Both countries have had similar experiences of immigration since the end of the Second World War, but they are considered to have taken divergent approaches to immigrant integration and education. While Britain has tended towards a multicultural race relations approach, France veers towards a Republican assimilationist approach. Through the analysis of policy discourse and documents, the authors seek to establish whether these distinct approaches to immigrant integration and education policy have been maintained or whether they are converging. This book will appeal to students and scholars of education policy as well as immigration and integration in both France and England.
Jonathan S. James is a PhD candidate at the UCL Institute of Education, UK, funded by the UCL Graduate Research Scholarship. His research investigates how policies developed in response to the threat of Islamist terrorism are being implemented in schools in England and France in light of the two countries’ policy traditions, and educators’ pre-existing values and practices.
Jan Germen Janmaat is Reader in Comparative Social Science at UCL Institute of Education, UK. His research focuses on the links between education, diversity and social cohesion. He is Editor of The Dynamics and Social Outcomes of Education Systems.