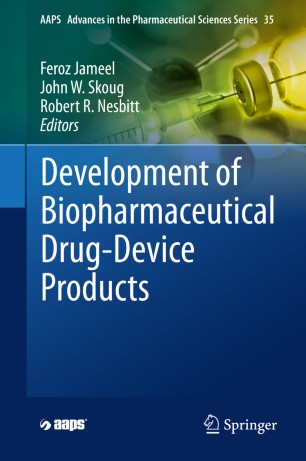 The biotechnology/biopharmaceutical sector has tremendously grown which led to the invention of engineered antibodies such as Antibody Drug Conjugates (ADCs), Bispecific T-cell engager (BITES), Dual Variable Domain (DVD) antibodies, and fusion proteins that are currently being used as therapeutic agents for immunology, oncology and other disease conditions. Regulatory agencies have raised the bar for the development and manufacture of antibody-based products, expecting to see the use of Quality by Design (QbD) elements demonstrating an in-depth understanding of product and process based on sound science. Drug delivery systems have become an increasingly important part of the therapy and most biopharmaceuticals for self-administration are being marketed as combination products. A survey of the market indicates that there is a strong need for a new book that will provide “one stop shopping” for the latest information and knowledge of the scientific and engineering advances made over the last few years in the area of biopharmaceutical product development. The new book entitled Development of Biopharmaceutical Drug Device Products is a reference text for scientists and engineers in the biopharmaceutical industry, academia or regulatory agencies.
With insightful chapters from experts in the field, this new book reviews first principles, covers recent technological advancements and provides case studies and regulatory strategies relating to the development and manufacture of antibody-based products.  It covers topics such as the importance of early preformulation studies during drug discovery to influence molecular selection for development, formulation strategies for new modalities, and the analytical techniques used to characterize them.  It also addresses important considerations for later stage development such as the development of robust formulations and processes, including process engineering and modeling of manufacturing unit operations, the design of analytical comparability studies, and characterization of primary containers (pre-filled syringes and vials).
Finally, the latter half of the book reviews key considerations to ensure the development and approval of a patient-centered delivery system design. This involves the evolving regulatory framework with perspectives from both the US and EU industry experts, the role of international standards, design control/risk management, human factors and its importance in the product development and regulatory approval process, as well as review of the risk-based approach to bridging between devices used in clinical trials and the to-be-marketed device.  Finally, case studies are provided throughout.
The typical readership would have biology and/or engineering degrees and would include researchers, scientific leaders, industry specialists and technology developers working in the biopharmaceutical field.

Feroz Jameel heads the formulation development function of New Biological Entities at AbbVie, Lake County, IL, where he is involved in early and late stage development of parenteral products. Prior to joining AbbVie, Feroz worked at Baxter Biosciences and Amgen.  At Baxter, Feroz was involved in the end-to-end development and tech transfer of recombinant Factor VIII (RecombinateTM).  At Amgen, Feroz worked over several years in the Parenteral Delivery Drug Product and Process Development where he was involved in the drug product development and tech transfer of several parenteral products including Enbrel®, Nplate®, Repatha® and Blincyto®. Feroz received his Master’s degree in Pharmaceutics from the University of Delhi and Ph.D. in Pharmaceutics (Pharmaceutical Sciences) from the University of Connecticut. His publications include over 20 peer-reviewed manuscripts, over 20 presentations, and several book chapters. He is the co-editor of the books “Formulation and Process Development Strategies for Manufacturing of Biopharmaceuticals” and “Quality by Design for Biopharmaceutical Drug Product Development”. He has held several leadership positions at the AAPS including chair of “Freezing and Drying Technologies” and led the industrial consortium for Lyo QbD.  Currently, he is leading the industrial consortium on “Best practices/guidelines for validation of Lyophilization process and products”. He is a recipient of 2 patents in lyophilization formulation and lyophilization process development. In addition to corporate awards, Henry Kramer from Baxter and Volwiler Award from AbbVie, Feroz received several awards including the AAPS and PDA’s Fred Simon’s award for the best paper published in the PDA Journal of Pharmaceutical Science and Technology. He has also chaired several symposia on the development of biological products.
John Skoug has more than 30 years of pharmaceutical industry experience and specializes in CMC product development across all stages of discovery and development.  Through early 2019, he was Senior Director in AbbVie’s drug product R&D organization, where he held a number of roles including head of preformulation, solid-oral formulation development, drug/device combination product development and CMC program management.  In these roles, he was responsible for CMC technical strategy and execution for small molecule programs and combination product programs for biologics.  Prior to AbbVie, John held similar scientific and leadership positions in Pharmaceutical R&D in Upjohn/Pharmacia/Pfizer.  John founded FarmCMC LLC in 2019 to leverage his technical and leadership expertise to help small and medium sized biopharmaceutical companies develop novel therapeutic assets and delivery systems through early and late stage development.  John received a Ph.D. in Analytical Chemistry from Purdue University, has more than 20 publications and presentations, and has served in various capacities with the American Association of Pharmaceutical Scientists, the Combination Product Coalition, and the IQ Consortium, where he was recognized with the Outstanding Service award in 2015.
Robert Nesbitt is a group leader in Human Factors and Drug Delivery System development in AbbVie’s Combination Product Development group in Lake County, IL. Bob has a BS in Engineering Operations from Iowa State University, and an MBA from the University of Chicago. He joined AbbVie in January 2015, after 16 years at Eli Lilly and Company, where he drove patient-centered design into device development, and where he supported the design and launch of nine different Lilly devices still in use today around the world. Prior to Lilly, Bob led process engineering and manufacturing for both Roche Diagnostics’ blood glucose monitoring and Baxter Healthcare’s Custom Sterile Procedure pack businesses. He has been active in the development of ISO standards for medical devices since 1999; is the US Technical Advisory Group (TAG) co-chair for AAMI’s ISO/TC76 and TC84 committees and has been Convenor of multiple working groups. He holds a patent for inhaled drug delivery device design, and has received Lilly’s “Changing the World” award (2001), “President’s Award” (2006) and was recognized as one of Lilly’s “Top 100 Innovators” (2014).