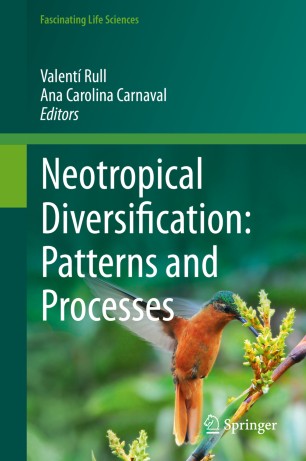 This book provides a comprehensive overview of the patterns of biodiversity in various neotropical ecosystems, as well as a discussion on their historical biogeographies and underlying diversification processes. All chapters were written by prominent researchers in the fields of tropical biology, molecular ecology, climatology, paleoecology, and geography, producing an outstanding collection of essays, synthetic analyses, and novel investigations that describe and improve our understanding of the biodiversity of this unique region. With chapters on the Amazon and Caribbean forests, the Atlantic rainforests, the Andes, the Cerrado savannahs, the Caatinga drylands, the Chaco, and Mesoamerica – along with broad taxonomic coverage – this book summarizes a wide range of hypotheses, views, and methods concerning the processes and mechanisms of neotropical diversification. The range of perspectives presented makes the book a truly comprehensive, state-of-the-art publication on the topic, which will fascinate both scientists and general readers alike.

Valentí Rull is a biologist with a Ph.D. in Paleoecology. Over the past 35 years, he has used past ecological evidence – mainly from palynology – to address topics such as i) the type and characteristics of biotic responses to environmental changes; ii) the role of human and climatic drivers as causes of ecological change; iii) the effects of tectonics, paleogeography and climate change on the origin of biodiversity; iv) hypotheses testing for long-term ecological processes; v) predictions on biotic responses to potential future climatic scenarios; and v) the development of better-informed strategies for biodiversity conservation. He has conducted his research in several temperate, tropical and subtropical regions, e.g. the northern tropical Andes, the Orinoco lowlands and delta, the Guayana region, the Maracaibo basin, Easter Island, the Azores and the Pyrenees.
Ana Carnaval was born and raised in Rio de Janeiro, Brazil, where she obtained her undergraduate degree in Biology from the Universidade Federal do Rio de Janeiro and her Master’s degree in Zoology from the Museu Nacional. She holds a Ph.D. in Evolutionary Biology from the University of Chicago, and completed her postdoctoral training at the Museum of Vertebrate Zoology, University of California Berkeley. Currently an Associate Professor of Molecular Ecology at the City College of New York, her research group studies spatial patterns of biodiversity and underlying evolutionary and ecological processes, with the explicit aim of improving biodiversity prediction and conservation in tropical regions. Her projects focus on tropical biogeography, integrative uses of comparative phylogeography, GIS-based distribution models, current environmental data and paleoclimatic simulations, and animal physiology, particularly in the Brazilian Atlantic rainforest, and, to a lesser extent, the Amazonian forest and the Cerrado.