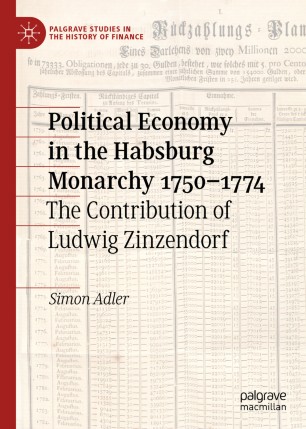 The Contribution of Ludwig Zinzendorf

Political Economy in the Habsburg Monarchy is an important study of the contribution of Austrian Enlightenment economist Ludwig Zinzendorf to the political economy of the Habsburg monarchy in the mid eighteenth century. Simon Adler provides the first comprehensive analysis, and first ever study in English, of the development of Zinzendorf’s thinking on the economy, commerce and, above all, state finances. Political Economy in the Habsburg Monarchy shows the extent to which Zinzendorf’s insights were part of the wider European movement dedicated to understanding political economy as an independent and important activity. It establishes Zinzendorf, a protégé of the State Chancellor Wenzel Anton Kaunitz, as a pivotal figure in the development of Austrian economic and financial policies during the 1750s and 1760s and explains how he challenged cameralism using the most advanced European economic ideas, notably from French writers around Vincent de Gournay. This book is based upon wide-ranging research of primary sources and comprehensive coverage of secondary literature and adds significantly to the ongoing historiographical turn towards political economy in the eighteenth century.

Simon Adler received his doctorate in history from the University of Cambridge, UK, and his masters in economics from the College of Europe, Bruges, Belgium. He is a business entrepreneur in the pharmaceutical industry and a Visiting Research Fellow at the Austrian Academy of Sciences. Prior to healthcare, he was working in Corporate Finance at European and US investment banks.

“The great value of this study is that it updates our understanding of eighteenth-century political economy in the Germanic world by carefully and convincingly tracing the connections of one demonstrably important economist-administrator, Ludwig Zinzendorf, to a politically influential and often theoretically refined school of economic thinkers.” (Paul Cheney, The European Journal of the History of Economic Thought, Vol. 43 (1), March, 2021)