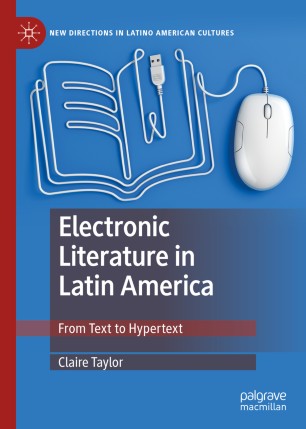 From Text to Hypertext

“Electronic Literature in Latin America is an authoritative and original study. It brilliantly shows how digital literature interacts with experimental literary predecessors, thus moving beyond unproblematised assertions of the empowering nature of new technologies and showing such work in dialogue with radical literary predecessors and embodying new possibilities, while remaining aware of the limitations of new media in the era of technocapitalism.  The case studies chosen provide a rich and detailed insight into the trajectory of electronic literature in twenty-first century Latin America and into the political and ethical issues that such cultural production raises.”

“Taylor’s focus on these texts as the inheritors of long-established literary traditions provides a useful and refreshing alternative to a tendency to frame electronic culture as exclusively popular or even mass culture. The project thus builds a vital argument about how radical literary traditions, both past and present, can make important contributions to ideological and political debates.”

This book explores one of the most exciting new developments in the literary field to emerge over recent decades: the growing body of work known as ‘electronic literature’, comprising literary works that take advantage of the capabilities of digital technologies in their enactment. Focussing on six leading authors within Latin(o) America whose works have proved pioneering in the development of these new literary forms, the book proposes a three-fold approach of aesthetics, technologics, and ethics, as a framework for analyzing digital literature.