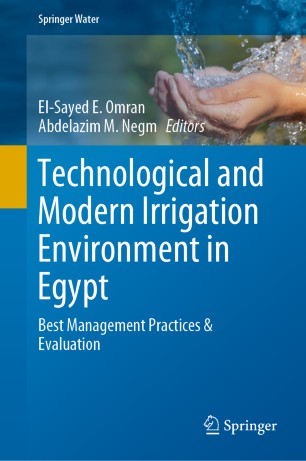 This book gathers contributions on modern irrigation environments in Egypt from an environmental and agricultural perspective. Written by leading experts in the field, it discusses a wide variety of modern irrigation problems. In the context of water resources management in Egypt, one fundamental problem is the gap between growing water demand and limited supply. As such, improving irrigation systems and providing farmers with better control over water are crucial to increasing productivity.

The book presents state-of-the-art technologies and techniques that can be effectively used to address a range of problems in modern irrigation, as well as the latest research advances. Focusing on water sensing and information technologies, automated irrigation technologies, and improved irrigation efficiency. It brings together a team of experts who share their personal experiences, describe the various applications, present recent advances, and discuss possibilities for interdisciplinary collaboration and implementing the techniques covered

Prof. El-Sayed Ewis Omran is a professor of Soil Science (RS & GIS) at the Faculty of Agriculture, Suez Canal University, Egypt. In June 1996 he obtained an MSc in soil science at Suez Canal University. From June 2003 he was studying at Wageningen University, The Netherlands. Meanwhile, he also awarded an MSc in geo-information science at Wageningen University in May 2005. From June 2005 to June 2007, he was  affiliated as a  PhD research at the Center for Geo-Information and Remote Sensing of Wageningen University, The Netherlands. From 2017 until now, he works as Professor of soil pedology (RS& GIS) at the Faculty of Agriculture, Suez Canal University. From 2018 until present, he was the Vice Dean for Community and Environmental Development, Institute of African Research and Studies and Nile Basin Countries. Aswan University. He participated in several international projects since 2007 until now. He published more than 60 papers in national and international journals and conferences and contributed in more than 20 chapters.. He is a reviewer for more than 20 scientific journals that indexed in Scopus and WoS. and associate editor of 5 journals. He is a member of the scientific committee of several international conferences and participated in more than 40 conferences and Workshops  as well..

Prof. Abdelazim Negm is a professor of Hydraulics  at the Faculty of Engineering, Zagazig University, Egypt, since 2004. He got his PhD in 1992 from Zagazig University (ZU) and his Msc from Ain shams University in the year 1990. He was the vice dean of the Faculty of Engineering of ZU from 12/2008 to 12/2011 and was the head of the Environmental Engineering Dept. at Egypt-Japan University of Science and Technology (E-JUST), Egypt, from october 2013 to March 2016. He participated in several international projects since 2006 until now. He published more than 300 papers in national and international journals and conferences and contributed in more than 50 chapters. Some of his papers were awarded  prizes of the best papers. He is the editor of several volumes at the Springer Handbook of Environmental Chemistry Series (HEC Series). Two volumes were published in May 2017 and 10 volumes were published in the year 2019. Additional, several volumes will be published during the year 2020.. He is a member of the scientific committee of several international conferences and a member of the organizing committee of others and participated in more than 80 conferences as well. He delivered several keynote talks at international conferences. Prof. Negm is a reviewers of more than international scientific journals that indexed in Scopus and WoS. He is the editor-in-Chief of EIJEST,  an associate editor of the EMJEI,  which is published by Springer . Also, he is a member of the editorial board of several scientific journals. Moreover, he is a member of the editorial board of the famous Springer Series titled “Handbook of Environmental Chemistry since 2019 and the vice head of the permanent scientific committee on Water Resources (51b), the supreme council of Egyptian Universities, Egypt. Prof. Negm is listed in the most famous and prestigious directories in the world including  the American Biographical Institute (ABI), Inc, USA, "Marquis Who's Who in the World",  27th Ed., 2010, USA  until now and in IBC's 2000 Outstanding Intellectuals of the 21st Century by International Biographical Center, Cambridge, England, since 2011 until present.