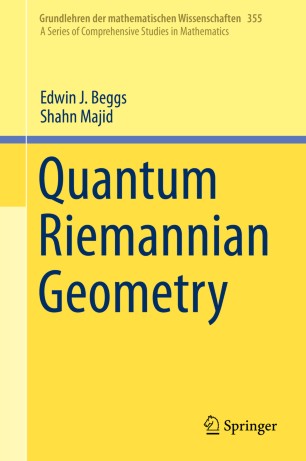 Such a theory is needed for the geometry of Hopf algebras or quantum groups, which provide key examples, as well as in physics to model quantum gravity effects in the form of quantum spacetime. The mathematical formalism can be applied to any algebra and includes graph geometry and a Lie theory of finite groups. Even the algebra of 2 x 2 matrices turns out to admit a rich moduli of quantum Riemannian geometries. The approach taken is a `bottom up’ one in which the different layers of geometry are built up in succession, starting from differential forms and proceeding up to the notion of a quantum `Levi-Civita’ bimodule connection, geometric Laplacians and, in some cases, Dirac operators.The book also covers elements of Connes’ approach to the subject coming from cyclic cohomology and spectral triples. Other topics include various other cohomology theories, holomorphic structures and noncommutative D-modules.

A unique feature of the book is its constructive approach and its wealth of examples drawn from a large body of literature in mathematical physics, now put on a firm algebraic footing. Including exercises with solutions, it can be used as a textbook for advanced courses as well as a reference for researchers.