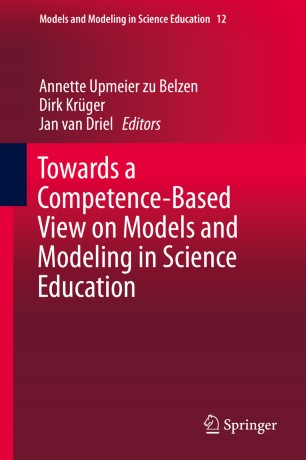 Part of the Models and Modeling in Science Education book series (MMSE, volume 12)

Annette Upmeier zu Belzen is a professor of biology education at Humboldt-Universität zu Berlin, Germany. After studies in biology, psychology and pedagogy she obtained a state exam in 1993 and a PhD on biology-oriented interests at Westfälische Wilhelms-Universität Münster in 1997. From 1997 to 2005 she worked as a junior researcher in Münster, in 2005 she was appointed full professor of science education in Berlin. Her research focuses on scientific reasoning and scientific inquiry, in particular in the process of modeling. She works on competence models and competence assessment as well as on competence-oriented teaching in secondary and higher education. She is engaged in the promotion of young scientists within in doctoral programs and is an editor of journals in the field of science education.

Dirk Krüger is a professor of biology education at Freie Universität Berlin, Germany. After studies in biology and mathematics he obtained 1986 a state exam, ended his traineeship in 1992, and was a teacher until 1997. In 1996 he obtained a PhD in biology at the Institute of Applied Genetics of Leibniz University Hannover. From 1997 to 2003 he worked as a research assistant in Hannover, in 2003 he was appointed a junior professor, in 2006 a full professor of biology education at Freie Universität Berlin. His research focuses on scientific reasoning and scientific inquiry, in particular in the process of modelling. He works on competence models and competence assessment as well as on competence-oriented teaching in secondary and higher education. He is an co-editor of fundamental theoretical and methodological books in science education at Springer and of a journal in the field of science education.

Jan van Driel is a professor of science education at Melbourne Graduate School of Education, University of Melbourne. After obtaining a Master’s degree in chemistry (1984), he worked as a teacher of chemistry in a secondary school. He did a PhD at Utrecht University, The Netherlands, which focused on the teaching and learning of chemical equilibrium. From 1995–2016, he worked at ICLON – Leiden University Graduate School of Teaching; in 2006 he was appointed full professor of science education. From 2010–2016, he was the director of ICLON, until moving to the University of Melbourne in September 2016. His research focuses on science teachers’ knowledge and beliefs and their development in the context of pre-service education and educational reform.