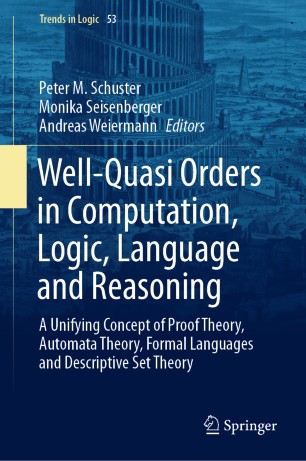 Part of the Trends in Logic book series (TREN, volume 53)

This book bridges the gaps between logic, mathematics and computer science by delving into the theory of well-quasi orders, also known as wqos. This highly active branch of combinatorics is deeply rooted in and between many fields of mathematics and logic, including proof theory, commutative algebra, braid groups, graph theory, analytic combinatorics, theory of relations, reverse mathematics and subrecursive hierarchies. As a unifying concept for slick finiteness or termination proofs, wqos have been rediscovered in diverse contexts, and proven to be extremely useful in computer science.

The book introduces readers to the many facets of, and recent developments in, wqos through chapters contributed by scholars from various fields. As such, it offers a valuable asset for logicians, mathematicians and computer scientists, as well as scholars and students.