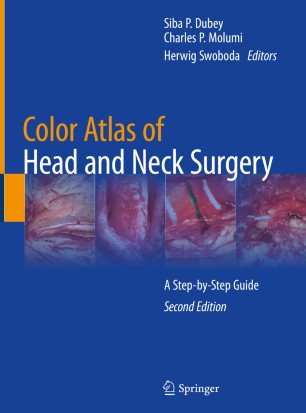 This surgical atlas, now in its second edition, provides superbly illustrated step-by-step descriptions of a wide range of open head and neck procedures, including radical and conservative approaches, aesthetic and reconstructive surgeries with the use of axial and free flaps, and surgery within the narrow confines of the skull base. Individual chapters are dedicated to surgery of the nose and paranasal sinuses, larynx and trachea, thyroid, salivary glands, mandible, face and lips, and head and neck, the repair of external nose defects, the use of axial and free flaps, and surgical treatment of temporal bone malignancies. The new edition, written by experts from across the world, covers a number of additional topics, such as pediatric head and neck surgery, laser surgery, and robotic surgery. It also features improved surgical photographs, enhanced descriptions of essential procedures, identification of pitfalls, many practical tips and best references available  for each procedure to assist readers. The atlas will be a comprehensive practical reference for clinicians in all specialties involved in head and neck surgery, including otolaryngologists, head and neck surgeons, plastic surgeons, maxillofacial surgeons, and surgical oncologists.

Siba P. Dubey, MBBS, DORL, MS, is a Professor and Academic Head of Otolaryngology at the School of Medicine and Health Sciences, University of Papua New Guinea and an ENT Consultant at Port Moresby General Hospital.After receiving his MBBS from BankuraSammilani Medical College & Hospital (under Calcutta University) in 1984, Dr. Dubey undertook residencies at the Postgraduate Institute of Medical Education and Research (PGIMER), Chandigarh, India. He subsequently became a Postgraduate Fellow at the ENT Clinic, University of Vienna, Austria, where he completed his Diploma in Otorhinolaryngology, and in 1995 he was appointed Senior Lecturer in Otolaryngology at the School of Medicine, University of Papua New Guinea. His surgical activity includes head and neck surgical oncology, oncologic and non-oncologic head and neck reconstructive surgery, as well as microscopic and endoscopic otologic, neurotologic, and skull base surgery. In 2011 he was awarded the Australian Society of Otolaryngology-Head and Neck Surgery Medal. Dr. Dubey is the author of more than 50 publications. Most recently, he was invited as a Visiting Professor to the Medical University of Vienna, Austria to complete the second edition of this book.
Charles P. Molumi, MBBS, DLO, MMed (Otorhinolaryngology), is a Specialist Otolaryngologist and Head & Neck Surgeon at Port Moresby General Hospital, Papua New Guinea, where he previously served as the Deputy Chief Ear, Nose, Throat – Head & Neck Surgeon.
Dr.Molumi is also an Honorary Lecturer in Otorhinolaryngology at the School of Medicine and Health Sciences, University of Papua New Guinea, where he is involved in teaching the undergraduate curriculum and the Postgraduate Diploma (DLO) and Master of Medicine (MMed) (Otolaryngology) programs. After completing both his MBBS (1998) and MMed (2006) at the University of Papua New Guinea, he was awarded the RACS Gold Medal as the best candidate in Surgery. Dr.Molumi is the author of seven publications in international journals. Recently, he was appointed Director of Medical Services, Port Moresby General Hospital.
Dr Herwig Swoboda, MD, PhD, received his training in Otolaryngology – Head and Neck Surgery at the Medical University of Vienna. After completing his PhD and serving as an Associate Professor and later Professor, he was appointed Head of the Department of Otolaryngology – Head and Neck Surgery at the General Hospital Hietzing and Rosenhügel Neurological Center in Vienna, Austria. Having served nearly 20 years in his current capacity, he has several publications to his credit, including a textbook for undergraduate students. Professor Swoboda is equally competent in open, microscopic, and endoscopic operative procedures in the Head and Neck region.