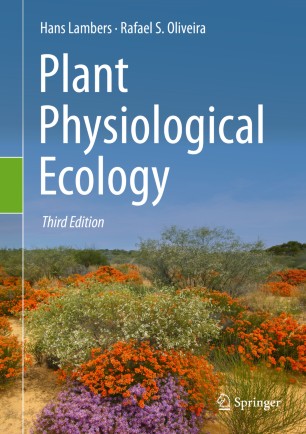 Growth, reproduction, and geographical distribution of plants are profoundly influenced by their physiological ecology: the interaction with the surrounding physical, chemical, and biological environments. This textbook highlights mechanisms that underlie plant physiological ecology at the levels of physiology, biochemistry, biophysics, and molecular biology. At the same time, the integrative power of physiological ecology is well suited to assess the costs, benefits, and consequences of modifying plants for human needs and to evaluate the role of plants in natural and managed ecosystems.

Plant Physiological Ecology, Third Edition is significantly updated, with many full color illustrations, and begins with the primary processes of carbon metabolism and transport, plant water relations, and energy balance. After considering individual leaves and whole plants, these physiological processes are then scaled up to the level of the canopy. Subsequent chapters discuss mineral nutrition and the ways in which plants cope with nutrient‑deficient or toxic soils. The book then looks at patterns of growth and allocation, life‑history traits, and interactions between plants and other organisms. Later chapters deal with traits that affect decomposition of plant material and with the consequences of plant physiological ecology at ecosystem and global levels.

Plant Physiological Ecology, Third Edition features several boxed entries that extend the discussions of selected issues, a glossary, and numerous references to the primary and review literature. This significant new text is suitable for use in plant ecology courses, as well as classes ranging from plant physiology to plant molecular biology.

From reviews of the previous editions:

". . . the authors cover a wide range of plant physiological aspects which up to now could not be found in one book. . . . The book can be recommended not only to students but also to scientists working in general plant physiology and ecology as well as in applied agriculture and forestry." - Journal of Plant Physiology

"This book must be regarded as the most integrated, informative and accessible account of the complexities of plant physiological ecology. It can be highly recommended to graduate students and researchers working in all fields of plant ecology." - Plant Science

". . . there is a wealth of information and new ideas here, and I strongly recommend that this book be on every plant ecophysiologist's shelf. It certainly represents scholarship of the highest level, and many of us will find it a useful source of new ideas for future research." - Ecology

Hans Lambers is an Emeritus Professor of Plant Biology at the University of Western Australia, in Perth, Australia, and a Distinguished Professor at China Agricultural University, in Beijing, China. He did his undergraduate degree at the University of Groningen, the Netherlands, followed by a PhD project on effects of hypoxia on flooding-sensitive and -tolerant Senecio species at the same institution. From 1979 to 1982, he worked as a postdoc at the University of Western Australia, Melbourne University, and the Australian National University in Australia, working on respiration and nitrogen metabolism. After a postdoc at his alma mater, he became Professor of Ecophysiology at Utrecht University, the Netherlands, in 1985, where he focused on plant respiration and the physiological basis of variation in growth rate among herbaceous plants. In 1998, he moved to the University of Western Australia, where he focused on plant mineral nutrition, especially in legume crops and native species occurring on severely phosphorus-impoverished soils in a global biodiversity hotspot in southwestern Australia and southeastern Brazil. He has been Editor-in-Chief of the journal Plant and Soil since 1992 and featured on the first ISI list of highly cited authors in the field of animal and plant sciences (since 2002), and on several other ISI lists more recently. He was elected Fellow of the Royal Netherlands Academy of Arts and Sciences in 2003, and Fellow of the Australian Academy of Science in 2012. He received Honorary Degrees from three Universities and from the Academy of Sciences in China.

Rafael S. Oliveira is a Professor of Ecology at the University of Campinas (UNICAMP), Brazil. He did his undergraduate degree at the University of Brasília, Brazil, followed by a PhD on water relations of Amazonian and savanna trees at the University of California, Berkeley, USA. He worked as a postdoc from 2005 to 2007 at the National Institute of Space Research and the University of São Paulo in Brazil to improve the representation of key vegetation processes on climate models, followed by a project on the ecohydrology of tropical montane cloud forests. In 2007, he became Professor at UNICAMP. His research focuses on plant hydraulics, vegetation-climate feedbacks, and mineral nutrition of tropical plants. He is an Associate Editor for the journal Functional Ecology and Section Editor for Plant and Soil.