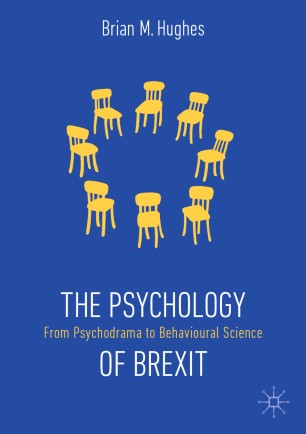 The Psychology of Brexit

From Psychodrama to Behavioural Science

‘In this excellent and clearly written volume, Hughes has illustrated the integral connection between political decisions and psychological well-being and as such this book is in the vanguard of the area.’
— Esther Greenglass, York University, Toronto, Canada
‘Hughes’s timely, insightful and brave analysis of the psychology of the politics of Brexit is a lesson for all.’
— Krys Kaniasty, Indiana University of Pennsylvania, USA, and Polish Academy of Sciences, Poland
‘A depth of psychological analysis of Brexit has up to now been in short supply. Brian Hughes fills this gap with a penetrating analysis of the impact on citizens and communities, written with energy and style. One that I think will earn an enduring place on the Brexit bookshelf.’
— Nicola Gale, City, University of London and former President of the British Psychological Society, UK
‘Hughes’s accessible and absorbing style makes this a must-read for anyone interested in human behaviour and decision-making.’
— Michael Smith, Northumbria University, UK
The Psychology of Brexit examines the psychological causes, catalysts, and consequences of Brexit. Unlike most cultural upheavals, Brexit is not the result of accidental tragedy or spontaneous economic turmoil. Rather, it exists because people decided to make it exist. It is a product of human psychology – shaped in critical ways by people’s perceptions, preferences, choices, self-images, attitudes, ideas, assumptions, group relations, and reasoned (or ill-reasoned) conclusions.
This book discusses how reasoning biases and illusions of control propel – and pollute – the perspectives of both Leavers and Remainers. It shows how social stereotypes and motivated irrationality help otherwise groundless beliefs thrive in everyday culture, leading to group polarisation and echo-chamber reasoning. It reveals the way cultural biases like sexism influence how Brexit politicians are portrayed and perceived. And it explores the psychological impact of Brexit – its effect on social attitudes, future thinking, and collective and individual mental health.
In this compelling new book, psychologist Brian Hughes examines what scientific psychology reveals about the dynamics of Brexit, what Brexit teaches us about ourselves, and what we can do to deal with its short-term impact and long-term fallout.
Brian M. Hughes is Professor of Psychology at the National University of Ireland, Galway. He is former President of the Psychological Society of Ireland (2004-2005), and a prominent advocate for scientific psychology, evidence-based policy, and the role of psychology in society.