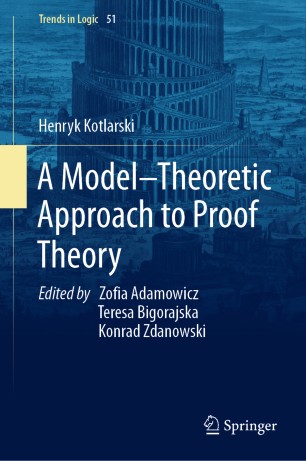 A Model–Theoretic Approach to Proof Theory

Part of the Trends in Logic book series (TREN, volume 51)

This book presents a detailed treatment of ordinal combinatorics of large sets tailored for independence results. It uses model theoretic and combinatorial methods to obtain results in proof theory, such as incompleteness theorems or a description of the provably total functions of a theory.

In the first chapter, the authors first discusses ordinal combinatorics of finite sets in the style of Ketonen and Solovay. This provides a background for an analysis of subsystems of Peano Arithmetic as well as for combinatorial independence results. Next, the volume examines a variety of proofs of Gödel's incompleteness theorems. The presented proofs differ strongly in nature. They show various aspects of incompleteness phenomena. In additon, coverage introduces some classical methods like the arithmetized completeness theorem, satisfaction predicates or partial satisfaction classes. It also applies them in many contexts.

Overall, the book's content lies on the border between combinatorics, proof theory, and model theory of arithmetic. It offers readers a distinctive approach towards independence results by model-theoretic methods.