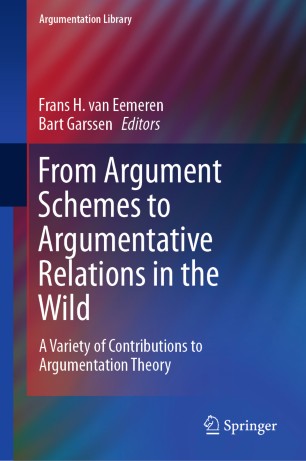 From Argument Schemes to Argumentative Relations in the Wild

A Variety of Contributions to Argumentation Theory

This volume comprises a selection of contributions to the theorizing about argumentation that have been presented at the 9th conference of the International Society for the Study of Argumentation (ISSA), held in Amsterdam in July 2018.

The  chapters included provide a general theoretical perspective on central topics in argumentation theory, such as argument schemes and the fallacies. Some contributions concentrate on the treatment of the concept of conductive argument. Other contributions are dedicated to specific issues such as the justification of questions, the occurrence of mining relations, the role of exclamatives, argumentative abduction, eudaimonistic argumentation and a typology of logical ways to counter an argument. In a number of cases the theoretical problems addressed are related to a specific type of context, such as the burden of proof in philosophical argumentation, the charge of committing a genetic fallacy in strategic manoeuvring in philosophy, the necessity of community argument, and connection adequacy for arguments with institutional warrants.

The volume offers a great deal of diversity in its breadth of coverage of argumentation theory and wide geographic representation from North and South America to Europe and China.