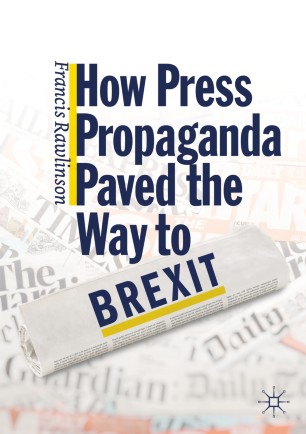 How Press Propaganda Paved the Way to Brexit

This book traces how right-wing newspapers in Britain helped shape British public opinion about the European Union over the course of the 20 years preceding the EU referendum in June 2016. The author argues that newspapers such as theTelegraph, Mail, Sun and Express have been effectively waging a long-term propaganda war, with the distortions and borderline fake news presented one of the factors that helped secure the narrow majority for Brexit. Written by an EU insider, the book presents hard facts and debunks the core myths on EU laws, exorbitant budget contributions, and uncontrolled immigration, as it contributes to the debate on the importance of the press for democracy more broadly.
Francis Rawlinson is a former EU Commission official. He is also Fellow of Kwansei Gakuin University, where he was a professor for EU studies from 2011 to 2017. He has written on EU competition law, state aid control, the euro and regional development.

Francis Rawlinson is a former EU Commission official. He is also Fellow of Kwansei Gakuin University, where he was a professor for EU studies from 2011 to 2017. He has written on EU competition law, state aid control, the euro and regional development.

“Fake news and disinformation distorting public opinion from real, checked facts is one of the biggest threats facing today’s democracies. In this must-read book, Rawlinson lucidly describes how emotions — sometimes unrelated to the real subject matter of the vote — gained the upper hand and brought an entire nation to a decision potentially harming its own interests.” (Enrico D'Ambrogio, Policy Analyst, EPRS – European Parliamentary Research Service)

“This book makes and important argument, not about the way in which the UK public was misled during the EU referendum, but about the way they had been served distortion for decades. What had been condoned as irrelevant tabloid cheekiness helped re-frame the real world. Clear, cool and well researched it is a sorry tale.” (Jean Seaton, Professor of Media History, University of Westminster, UK, and Official Historian of the BBC)

“This timely book revisits the major controversies over sovereignty, immigration and related issues that helped Leave win in 2016. Written by a former European Commission official, it offers a passionate yet informative critique of the case made for Brexit by many British newspapers. The book also provides valuable insights into how these papers developed and articulated their Eurosceptic message over the decades prior to the referendum.” (Dominic Wring, Professor of Political Communication, Loughborough University, UK)