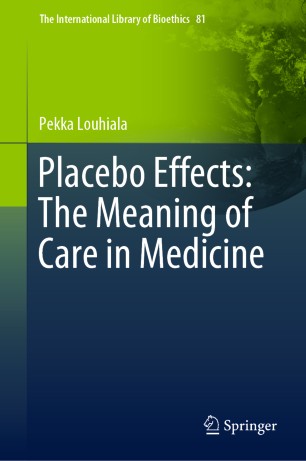 Placebo Effects: The Meaning of Care in Medicine

Part of the The International Library of Bioethics book series (ILB)

This book provides a perspective on the concepts placebo and placebo effects, which has been missing so far: a detailed analysis of the history of the terms, their current use, suggested alternatives and the implications of the conceptual confusion. Everybody knows something about placebos and placebo effects. If, however, people are asked to define the concepts, the spectrum becomes wide. Does 'placebo' refer to an inert treatment or does it cover all elements of the patient-physician-interaction except for pharmacological or other physiological mechanisms? Furthermore, if, by definition, a placebo has no effect, what sense does it make to talk about a 'placebo effect'? Even in scientific literature the concepts ‘placebo’ and ‘placebo effect’ are used in many senses and often in a confusing way. While this book discusses many issues which keep puzzling physicians, it also covers the historical developments of the concepts of placebo and placebo effect as well as the conceptual confusion in the definitions. This book is intended for physicians, philosophers, psychologists and any other people interested in placebos, placebo effects and the physician-patient relationship.