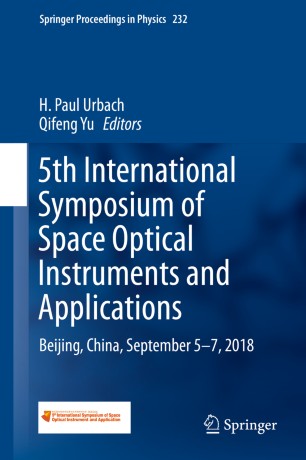 The symposium focused on key technological problems regarding optical instruments and their applications in a space context. It covered the latest developments, experiments and results on the theory, instrumentation and applications of space optics. The book is split into five main sections: The first covers optical remote sensing system design, the second focuses on advanced optical system design, and the third addresses remote sensor calibration and measurement. Remote sensing data processing and information extraction are then presented, followed by a final section on remote sensing data applications.

Prof. Dr. Paul Urbach is head of the Optics Research Group of Delft University of Technology, the Netherlands, and former president and member of the executive committee of the European Optical Society. Research areas of his optics group include Integrated Photonics, Interferometry and Imaging, Diffraction Theory, Data Storage.

Prof. Yu Qifeng is Professor and Doctoral Supervisor in the Military Aerospace Department of the School of Materials Science and Engineering in the National University of Defense Technology (NUDT), China. He graduated from Northwestern Polytechnical University and obtained his Master’s degree from the Space Technology Department in NUDT. He earned his PhD at the Institute of Applied Laser Technology (BIAS), Bremen University, Germany. He worked as research associate, teaching assistant and lecturer at NUDT and became full professor and doctoral supervisor in NUDT until now. He was elected Member of the Chinese Academy of Sciences in 2009.