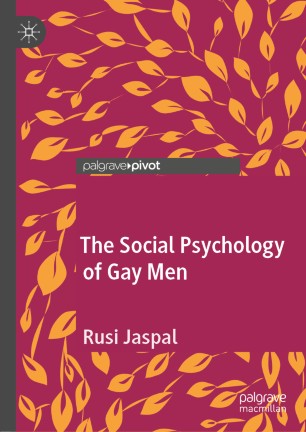 The Social Psychology of Gay Men

“Drawing creatively from identity process theory and social representations theory, Jaspal’s meticulous analysis of the social and psychological challenges gay men face – and the impacts on their mental and sexual health – serves as an urgent and persuasive call for continued progressive action, despite the advancement of gay rights in recent decades.”
Andrew Kam-Tuck Yip, Professor of Sociology, University of Nottingham, UK
“A wonderful, wide-ranging and much-needed introduction to the field of social psychology of gay men. Written in an accessible but scholarly manner it is comprehensive in focus and critical in orientation. This is a groundbreaking text, and a welcome addition. It certainly provides an excellent resource for students and academics alike.”
Professor Constantinos Phellas, Vice Rector for Faculty and Research, University of Nicosia, Cyprus
“Anyone interested in the dynamics that mould the identities of gay men should read this book.  Never afraid of the wicked questions, Jaspal presents an analysis that critically synthesises the current dominant theories in social psychology to produce his unique narrative of the experiences of gay men.”
Dame Glynis Breakwell, Emeritus Professor, University of Bath, UK
This book focuses on the social psychological aspects of gay men’s lives and provides a cutting-edge examination of topics including sexual orientation, sexual behavior, identity, relationships, prejudice, and health. The Social Psychology of Gay Men forces us to re-think existing theory and research, much of which has taken heterosexuality for granted. With identity process theory at its heart, this book advocates a social psychology of gay men which incorporates three levels of analysis – the psychological, interpersonal and societal. The book promises not only a deeper understanding of gay men’s lives but also pathways for enhancing wellbeing, intergroup relations and equality in this key population. This illuminating and thought-provoking text is an invaluable resource not only for psychologists, but for students, scholars and practitioners working in the area of gay men’s life.
Rusi Jaspal is Pro Vice-Chancellor (Research) and Professor of Psychology and Sexual Health at De Montfort University, Leicester, UK, and Adjunct Professor at Åbo Akademi University, Turku, Finland. Rusi Jaspal is a Chartered Psychologist and Fellow of the British Psychological Society.