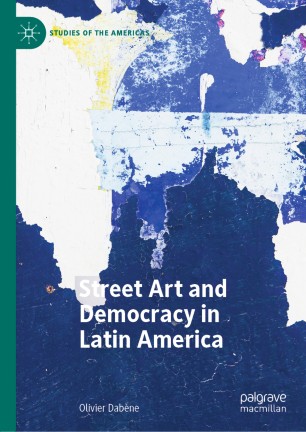 “This book is a striking example of the ‘cultural turn’ that has gained momentum as more orthodox approaches to the study of democracy have displayed their limitations. Olivier Dabène demonstrates convincingly that this is a buoyant, widespread and influential counterpart to the sub-continent’s more recognized outlets of political-cum-artistic expression. These innovations are particularly vivid and provocative in the five Latin American cities he has studied. The author brings to life an impressive range of talented young street artists, and helps the reader to appreciate both their distinctive histories and their collective interactions.”

This book explores street art’s contributions to democracy in Latin America through a comparative study of five cities: Bogota (Colombia), São Paulo (Brazil), Valparaiso (Chile), Oaxaca (Mexico) and Havana (Cuba). The author argues that when artists invade public space for the sake of disseminating rage, claims or statements, they behave as urban citizens who try to raise public awareness, nurture public debates and hold authorities accountable. Street art also reveals how public space is governed. When local authorities try to contain, regulate or repress public space invasions, they can achieve their goals democratically if they dialogue with the artists and try to reach a consensus inspired by a conception of the city as a commons. Under specific conditions, the book argues, street level democracy and collaborative governance can overlap, prompting a democratization of democracy.

Olivier Dabène is Professor of Political Science at the Paris Institute of Political Studies (Sciences Po). He is also Senior Researcher at the Center for International Studies (CERI) and President of the Political Observatory of Latin America and the Caribbean (OPALC), both at Sciences Po, France.