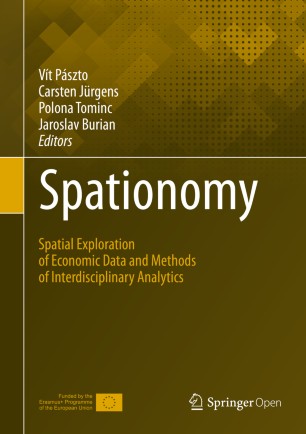 Spatial Exploration of Economic Data and Methods of Interdisciplinary Analytics

This open access book is based on "Spationomy – Spatial Exploration of Economic Data", an interdisciplinary and international project in the frame of ERASMUS+ funded by the European Union.
The project aims to exchange interdisciplinary knowledge in the fields of economics and geomatics. For the newly introduced courses, interdisciplinary learning materials have been developed by a team of lecturers from four different universities in three countries. In a first study block, students were taught methods from the two main research fields. Afterwards, the knowledge gained had to be applied in a project. For this international project, teams were formed, consisting of one student from each university participating in the project. The achieved results were presented in a summer school a few months later. At this event, more methodological knowledge was imparted to prepare students for a final simulation game about spatial and economic decision making.
In a broader sense, the chapters will present the methodological background of the project, give case studies and show how visualisation and the simulation game works.