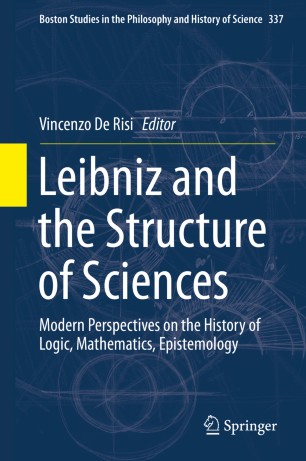 Leibniz and the Structure of Sciences

Modern Perspectives on the History of Logic, Mathematics, Epistemology

Part of the Boston Studies in the Philosophy and History of Science book series (BSPS, volume 337)

The book offers a collection of essays on various aspects of Leibniz’s scientific thought, written by historians of science and world-leading experts on Leibniz. The essays deal with a vast array of topics on the exact sciences: Leibniz’s logic, mereology, the notion of infinity and cardinality, the foundations of geometry, the theory of curves and differential geometry, and finally dynamics and general epistemology. Several chapters attempt a reading of Leibniz’s scientific works through modern mathematical tools, and compare Leibniz’s results in these fields with 19th- and 20th-Century conceptions of them. All of them have special care in framing Leibniz’s work in historical context, and sometimes offer wider historical perspectives that go much beyond Leibniz’s researches. A special emphasis is given to effective mathematical practice rather than purely epistemological thought. The book is addressed to all scholars of the exact sciences who have an interest in historical research and Leibniz in particular, and may be useful to historians of mathematics, physics, and epistemology, mathematicians with historical interests, and philosophers of science at large.

Vincenzo De Risi is currently Research Fellow at the French CNRS. He has previously been Research Director at the Max Planck Institute for The History of Science in Berlin (2010-2016), fellow of the Max Planck Institute for Mathematics in the Sciences in Leipzig and invited Leibniz-Professor in the latter city. He worked extensively on the history of geometry and geometrical epistemology from Antiquity to the Early Modern Age, and in particular on Leibniz’s analysis situs, and the discovery of non-Euclidean geometry. His main publications are Geometry and Monadology: Leibniz’s Analysis Situs and Philosophy of Space (2007), Leibniz on the Parallel Postulate and the Foundations of Geometry (2015), a commented edition and translation of Saccheri’s masterwork on non-Euclidean geometry (Euclid vindicated from Every Blemish, 2014), and a collection of essays on geometry and space (Mathematizing Space: The Objects of Geometry from Antiquity to the Early Modern Age, 2015), all published by Birkhäuser. He has recently published a long essay on the tradition of Euclid’s Elements (The Development of Euclidean Axiomatics, “Archive for History of Exact Sciences”, 2016)

“The volume should be of value to scholars of Leibniz with interests in the ‘exact sciences’ and the formal dimensions of his thinking, as well as to historians and philosophers concerned with understanding how Leibniz’s thinking anticipates later approaches. … the volume is a valuable contribution to our understanding of Leibniz’s projects in the exact sciences.” (Christopher P. Noble, Metascience, August 20, 2020)