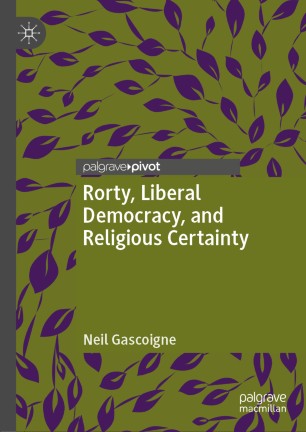 This book asks whether there any limits to the sorts of religious considerations that can be raised in public debates, and if there are, by whom they are to be identified. Its starting point is the work of Richard Rorty, whose pragmatic pluralism leads him to argue for a politically motivated anticlericalism rather than an epistemologically driven atheism. Rather than defend Rorty’s position directly, Gascoigne argues for an epistemological stance he calls ‘Pragmatist Fideism’.

The starting point for this exercise in what Rorty calls ‘Cultural Politics’ is an acknowledgement that one must appeal to both secularists and those with religious commitments. In recent years ‘reformed’ epistemologists have aimed to establish a parity of epistemic esteem between religious and perceptual beliefs by exploiting an analogy in respect of their mutual vulnerability to sceptical challenges. Through an examination of this analogy, and in light of Wittgenstein’s On Certainty, this book argues that understood correctly the ‘parity’ argument in fact lends epistemological support to the argument that religious considerations should not be raised in public debate. The political price paid—paying the price of politics—is worth it: the religious thinker is provided with a good reason for maintaining that their practices and beliefs are not undermined by other forms of religious life.