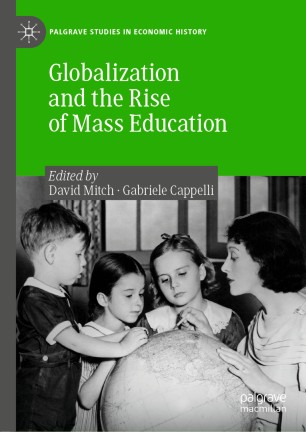 Globalization and the Rise of Mass Education

This edited collection explores the historical determinants of the rise of mass schooling and human capital accumulation based on a global, long-run perspective, focusing on a variety of countries in Europe, the Middle East, Asia, Africa and the Americas. The authors analyze the increasing importance attached to globalization as a factor in how social, institutional and economic change shapes national and regional educational trends. Although recent research in economic history has increasingly devoted more attention to global forces in shaping the institutions and fortunes of different world regions, the link and contrast between national education policies and the forces of globalization remains largely under-researched within the field.

The globalization of the world economy, starting in the nineteenth century, brought about important changes that affected school policy itself, as well as the process of long-term human capital accumulation. Large migrations prompted brain drain and gain across countries, alongside rapid transformations in the sectoral composition of the economy and demand for skills. Ideas on education and schooling circulated more easily, bringing about relevant changes in public policy, while the changing political voice of winners and losers from globalization determined the path followed by public choice. Similarly, religion and the spread of missions came to play a crucial role for the rise of schooling globally.