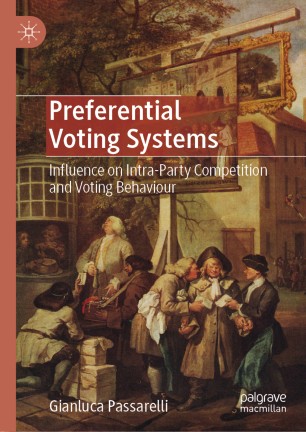 This book examines the effects of preferential voting on intraparty electoral competition and voting behavior. Using data covering 19 countries and over 200 elections, this study sheds light on a somewhat neglected aspect of electoral systems. The author demonstrates that the ability of voters to influence the selection and deselection of MPs under preferential voting systems is not as important as is often assumed. Instead, their ability to shape the election of a given candidate depends heavily on the balance between party power and voter power. In this way, this book advances the understanding of the effect of preferential voting on intra-party dynamics, parliamentary turnover, and voter behavior. Based on a rigorous, data-led methodological approach, the book contributes to both the theory and practice of the study of electoral systems, and should be read by scholars, students and practitioners interested in preferential voting systems.

​Gianluca Passarelli is Associate Professor in Political Science at the Department of Political Sciences, Sapienza University, Italy. His main research interests concern presidents of the republic, political parties, electoral systems, elections and electoral behaviour. He is the author of The Presidentialization of Political Parties (2015). His research has appeared in Party Politics, Political Geography, Representation, French Politics, and Political Studies Review. He is co-editor of the Palgrave Studies in Presidential Politics book series (with R. Elgie).