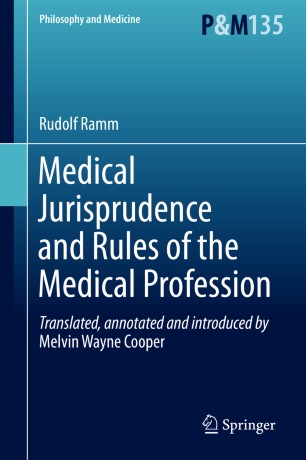 Medical Jurisprudence and Rules of the Medical Profession

Part of the Philosophy and Medicine book series (PHME, volume 135)

The Nazi Viewpoint on the Position and Responsibilities of the Physician in the German National Socialist Society.

This work is translated, annotated and introduced by Melvin Wayne Cooper.

This is the first translation in English of Rudolf Ramm’s textbook Ärztliche Rechts- und Standeskunde: Der Arzt als Gesundheitserzieher, translated and introduced by Melvin Wayne Cooper. Medical Jurisprudence and Rules of the Medical Profession has been reported to be an influential manual for medical ethics in Nazi Germany and is commonly quoted as representing the Nazi viewpoint of the position and responsibilities of the physician in the National Socialist society. It interprets the National Socialist Weltanschauung, i.e. the National Socialist Philosophical Worldview, and makes explicit how this world view was to be actuated by the true National Socialist physician. It is a good text to attempt to see the National Socialist medical world view from the perspective of its practitioners. Ramm’s text could be viewed as being analogous to an Army Field Manual for the practicing National Socialist physician. It dictates the specific applications of the legal values and rules which emanate from this Weltanschauung to the developing medical students and practicing National Socialist physicians. According to some scholars Ramm’s book, which was written not only for students but also for postgraduates, and which received positive reviews in German medical journals, is the most important known historical source pertaining to the instruction of Nazi medical ethics. The 1942 edition sold out within a year, and a second edition published in 1943 included an extended appendix of medical laws. Through this book Ramm’s unique text is now available for an English language audience, thanks to the thorough translation and accessible introduction by Melvin Wayne Cooper.