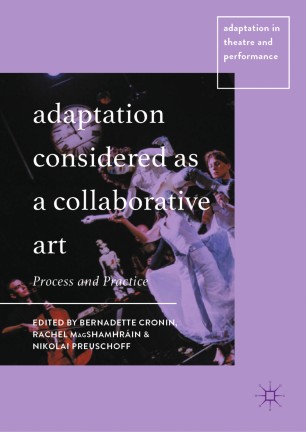 Adaptation Considered as a Collaborative Art

Part of the Adaptation in Theatre and Performance book series (ATP)

This book examines the processes of adaptation across a number of intriguing case studies and media. Turning its attention from the 'what' to the 'how' of adaptation, it serves to re-situate the discourse of adaptation studies, moving away from the hypotheses that used to haunt it, such as fidelity, to questions of how texts, authors and other creative practitioners (always understood as a plurality) engage in dialogue with one another across cultures, media, languages, genders and time itself. With fifteen chapters across fields including fine art and theory, drama and theatre, and television, this interdisciplinary volume considers adaptation across the creative and performance arts, with a single focus on the collaborative.

Bernadette Cronin is an actor and theatre practitioner-researcher who co-founded Gaitkrash Theatre Company in 2007 to make experimental theatre work at the intersection between art forms. She teaches in the Department of Theatre at University College Cork, Ireland and her research focuses mainly on adapting and devising.

Nikolai Jan Preuschoff teaches German at NYU Berlin and Literary Studies at the University of Erfurt. Germany. He is the author of Mit Walter Benjamin: Melancholie, Geschichte und Erzählen bei W.G. Sebald (2016) and is currently working on a postdoctoral project on poetics and modesty.