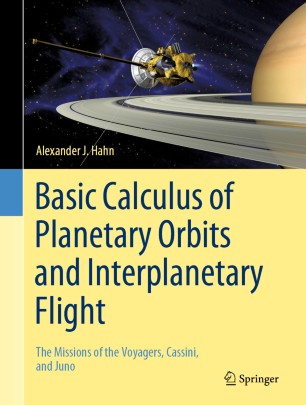 The Missions of the Voyagers, Cassini, and Juno

Intended for a one- or two-semester course, this text applies basic, one-variable calculus to analyze the motion both of planets in their orbits as well as interplanetary spacecraft in their trajectories.  The remarkable spacecraft missions to the inner and outermost reaches of our solar system have been one of the greatest success stories of modern human history. Much of the underlying mathematical story is presented alongside the astonishing images and extensive data that NASA’s Voyager, NEAR-Shoemaker, Cassini, and Juno missions have sent back to us.

First and second year college students in mathematics, engineering, or science, and those seeking an enriching independent study, will experience the mathematical language and methods of single variable calculus within their application to relevant conceptual and strategic aspects of the navigation of a spacecraft. The reader is expected to have taken one or two semesters of the basic calculus of derivatives, integrals, and the role that limits play. Additional prerequisites include knowledge of coordinate plane geometry, basic trigonometry, functions and graphs, including trig, inverse, exponential, and log functions.

The discussions begin with the rich history of humanity’s efforts to understand the universe from the Greeks, to Newton and the Scientific Revolution, to Hubble and galaxies, to NASA and the space missions.   The calculus of polar functions that plays a central mathematical role is presented in a self-contained way in complete detail. Each of the six chapters is followed by an extensive problem set that deals with and also expands on the concerns of the chapter. The instructor has the flexibility to engage them with greater or lesser intensity.

“I have been an aerospace engineer for 39 years and honestly, it would be hard for me to overstate how valuable I believe this book will be to numerous scientific and engineering disciplines and in particular to the future of aerospace engineering … This book is perfectly crafted to motivate, educate, and prepare the scientists and engineers who wish to reach for the sky and beyond.” —Dr. Mario Zoccoli, Aerospace Engineer, NASA and Lockheed Martin

Alexander J. Hahn is Professor Emeritus of Mathematics at the University of Notre Dame. His research over the years has had a focus on the following algebraic concerns: Orthogonal groups and other classical matrix groups both over fields, integral domains and in number theoretic situations, and related structures such as Clifford algebras, Azumaya algebras, quadratic and Hermitian forms and their Witt groups, and linear and Hermitian K-Theory. In the last few years Dr. Hahn has become interested in the history of mathematics and science. In addition to this present book, Alexander Hahn's books published with Springer include : The Classical Groups and K-Theory (Grundlehren);  Quadratic Algebras (Universitext); Basic Calculus: From Archimedes to Newton to its Role in Science (TiM). Hahn has also published Mathematical Excursions to the World's Great Buildings with PUP.

“This is an interesting literature for those whose study of astronomy is targeted to applications in dynamics of gravitationally interacting bodies … . The book is also rich in texts with general information on the state of the art data and current understanding about the structure of the Solar system obtained from numerous space exploration projects which makes it useful not only for astronomy teachers and students but also as a reference literature for a more general scientific community.” (Vladimir Čadež, zbMATH 1444.85001, 2020)