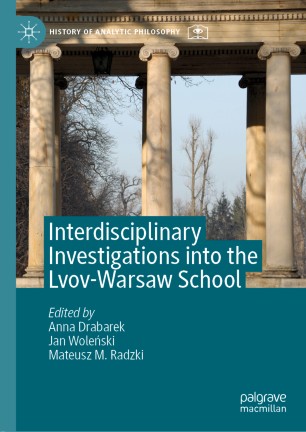 Interdisciplinary Investigations into the Lvov-Warsaw School

This book presents the heritage of the Lvov-Warsaw School from both the historical and the philosophical perspective. The historical view focuses on the beginnings and the dramatic end of the School brought about by the outbreak of World War II. The philosophical view, on the other hand, encompasses a broad spectrum of issues, including logical, epistemological, axiological, and psychological problems, revealing the interdisciplinary nature of studies carried out by Kazimierz Twardowski and his students.
With thirteen diverse and original essays this volume is split into three parts: History, Culture and Axiology; Psychology; and Logic and Methodology. Exploring not only the history of philosophy represented by the Lvov-Warsaw school, the book also reflects on the condition of contemporary philosophy from the perspective of concepts developed by its representatives. Furthermore, the studies presented in this book delve into problems of contemporary science and its distinctive interdisciplinary character. This volume is, therefore, not only a collection of analyses of the Lvov-Warsaw School philosophy, but also an investigation into the interdisciplinarity of science and philosophy itself.