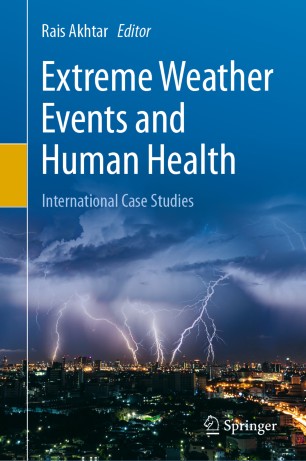 This edited book assesses the impacts of various extreme weather events on human health and development from a global perspective, and includes several case studies in various geographical regions around the globe.

Covering all continents, it describes the impact of extreme weather conditions such as flash floods, heatwaves, cold waves, droughts, forest fires, strong winds and storms in both developing and developed countries. The contributing authors also investigate the spread of diseases and the risk to food security caused by drought and flooding.

Further, the book discusses the economic damage resulting from natural disasters including hurricanes. It has been estimated that in 2017 natural disasters and climate change resulted in economic losses of 309 billion US dollars. Scientists also predict that if nothing is done to curb the effects of climate change, in Europe the death toll due to weather disasters could rise 50-fold by the end of the 21st century, with extreme heat alone causing more than 150,000 deaths a year, as the report on global warming of 1.5°C warns that China, Russia and Canada’s current climate policies would steer the world above a catastrophic 5°C of warming by the end of 2100. As such, the book highlights how the wellbeing of different populations is threatened by extreme events now and in the foreseeable future.