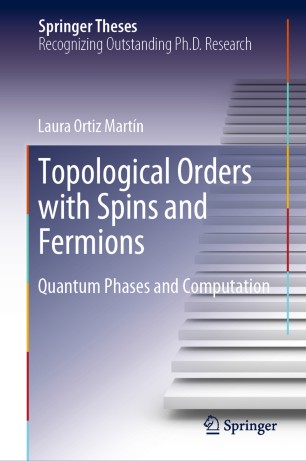 Topological Orders with Spins and Fermions

This thesis deals with topological orders from two different perspectives: from a condensed matter point of view, where topological orders are considered as breakthrough phases of matter; and from the emerging realm of quantum computation, where topological quantum codes are considered the most appealing platform against decoherence.
The thesis reports remarkable studies from both sides. It thoroughly investigates a topological order called the double semion model, a counterpart of the Kitaev model but exhibiting richer quasiparticles as excitations. A new model for symmetry enriched topological order is constructed, which adds an onsite global symmetry to the double semion model. Using this topological phase, a new example of topological code is developed, the semion code, which is non-CSS, additive, non-Pauli and within the stabiliser formalism.
Furthermore, the thesis analyses the Rashba spin-orbit coupling within topological insulators, turning the helical edge states into generic edges modes with potential application in spinstronics. New types of topological superconductors are proposed and the novel properties of the correspondingly created Majorana fermions are investigated. These Majorana fermions have inherent properties enabling braiding and the performance of logical gates as fundamental blocks for a universsal quantum computator.