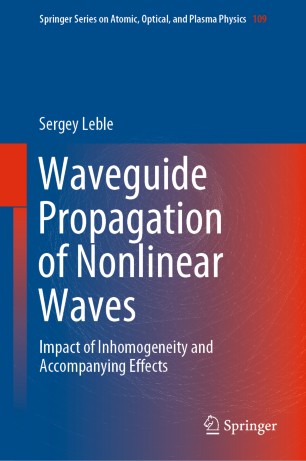 Impact of Inhomogeneity and Accompanying Effects

This book addresses the peculiarities of nonlinear wave propagation in waveguides and explains how the stratification depends on the waveguide and confinement. An example of this is an optical fibre that does not allow light to pass through a density jump. The book also discusses propagation in the nonlinear regime, which is characterized by a specific waveform and amplitude, to demonstrate so-called solitonic behaviour. In this case, a wave may be strongly localized, and propagates with a weak change in shape. In the waveguide case there are additional contributions of dispersion originating from boundary or asymptotic conditions.

Offering concrete guidance on solving application problems, this essentially (more than twice) expanded second edition includes various aspects of guided propagation of nonlinear waves as well as new topics like solitonic behaviour of one-mode and multi-mode excitation and propagation and plasma waveguides, propagation peculiarities of electromagnetic waves in metamaterials, new types of dispersion, dissipation, electromagnetic waveguides, planetary waves and plasma waves interaction.The key feature of the solitonic behaviour is based on Coupled KdV and Coupled NS systems. The systems are derived in this book and solved numerically with the proof of stability and convergence.  The domain wall dynamics of ferromagnetic microwaveguides  and Bloch waves in  nano-waveguides are also included with some problems of magnetic momentum and charge transport.