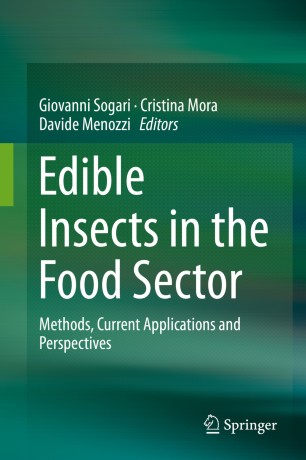 Edible Insects in the Food Sector

This book explores one of the most discussed and investigated novel foods in recent years: edible insects. The increasing demand for alternative protein sources worldwide had led the Food and Agriculture Organization of the United Nations (FAO) to promote the potential of using insects both for feed and food, establishing a program called “Edible Insects.” Although several social, environmental, and nutritional benefits of the use of insects in the human diet have been identified, the majority of the population in Western countries rejects the idea of adopting insects as food, predominantly for cultural reasons.

Nevertheless, international interest in promoting the consumption of insects has grown significantly, mainly in North America and Europe. This trend is mostly due to increasing attention and involvement from the scientific network and the food and feed industries, as well as governments and their constituents.

The book explores the current state of entomophagy and identifies knowledge gaps to inform primary research institutions, students, members of the private sector, and policymakers to better plan, develop, and implement future research studies on edible insects as a sustainable source of food. The case studies and issues presented in this book cover highly up-to-date topics such as aspects of safety and allergies for human consumption, final meat quality of animals fed with insects, the legislative framework for the commercialization of this novel food, and other relevant issues.