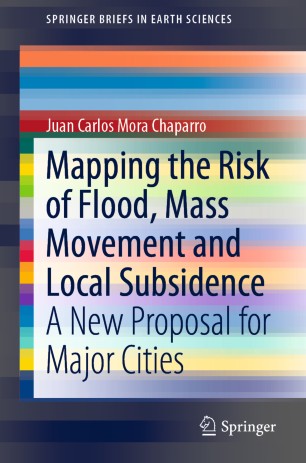 Mapping the Risk of Flood, Mass Movement and Local Subsidence

A New Proposal for Major Cities

This book proposes a methodology for the identification of flooding in urban areas, by the denomination of 1) urban hydrographic basin; and 2) polygon of flood risk.
This work will enable readers to elaborate a preventive program in Latin America and analogous regions. The authorities could use it as a basis to create urban planning strategies or preventive programs to reduce or eliminate the flooding hazard.
The growth of an urban area implies that the natural terrain is covered by an asphalt folder, which results in an Urban Hydrographic Basin where rainwater drains down its streets filtering through sewers towards rainwater drains or wastewater. Initially, the drainages are calculated according to the population in a specific urban area, however, the population growth causes the growth of the urban area, where the old drainages and new roads are linked, causing their saturation and chaos. More water runs down the streets and is accumulated in the lower areas, causing flooding.