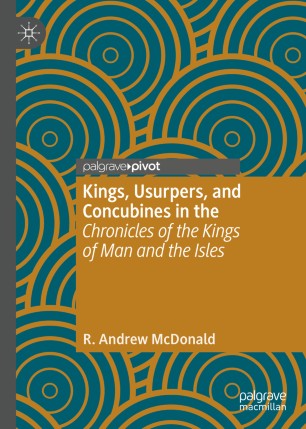 Kings, Usurpers, and Concubines in the 'Chronicles of the Kings of Man and the Isles'

"Shines a critical light on a rather shadowy period of history. The historical heroes and villains of the Kingdom of Man and the Isles are characters worthy of any modern fantasy TV drama.  Andrew McDonald’s usual academic rigour untangles the reality from the myth, leaving an important reference work and a thoroughly readable story."

"R. Andrew McDonald turns a case-study of the thirteenth-century manuscript chronicling the hero-kings of Man and the Isles into a thoughtful, coherent, and convincing elucidation of what he pithily terms ‘the deadly game of Manx thrones’ from roughly 1079 to 1275. The book is equal parts scholarly and accessible – a difficult balance to achieve. This is a stimulating and highly-recommended read."

"An important contribution to European and Atlantic history with its fresh examination of the kingdom of Man and the Isles.R. Andrew McDonald’s new reading of the source materials leads to an ambitious interpretation of the events from the kingdom’s origins to its loss of independence. He gives particular attention to the fraught political maneuverings of the mid-thirteenth century as the rulers of the Isles attempted to maintain their independence in the face of plotting by the kings of Norway, England, and Scotland to add the island kingdom to their respective realms. McDonald’s use of multiple methodologies combined with a close reading of the primary records illuminates the history of a significant, but neglected, region of Europe.”

This Palgrave Pivot explores the representation of sea kings, sinners, and saints in the mid-thirteenth century Chronicles of the Kings of Man and the Isles, the single most important text for the history of the kingdoms of Man and the Isles, c.1066-1300. The focus of the Chronicles on the power struggles, plots and intrigues within the ruling dynasties of Man and the Isles offers an impressive array of heroes and villains. The depiction of the activities of heroic sea kings like Godred Crovan, tyrannical usurpers like Harald son of Godred Don, and their concubines and wives, as well as local heroes like Saint Maughold, raises important questions concerning the dynamic interactions of power, gender and historical writing in the medieval Kingdoms of Man and the Isles, and provide new insights into the significance of the text that is our most important source of information on these ‘Forgotten Kingdoms’ of the medieval British Isles.