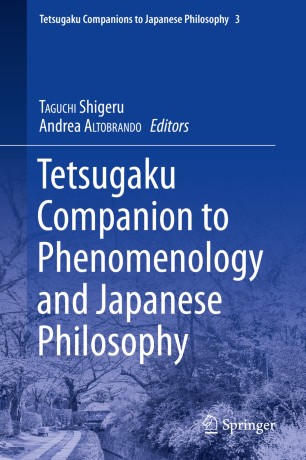 This volume addresses the impact of the introduction of phenomenology in Japan and its interaction with Japanese philosophy. It is well known that phenomenology was introduced at a very early stage in Japan. Furthermore, phenomenology still constitutes one of the main currents of thought in Japan. However, the specific way in which phenomenology has interacted with the indigenous Japanese tradition of thought and Japanese culture has until now not been addressed in great detail. This volume fills that gap. It discusses in detail the encounter and the interaction between Japanese thought and phenomenological reflection, with special regards to the topics of awareness and the self, the experience of otherness, ethics, and metaphysical issues. The book shows how phenomenology has served, and still serves, Japan to re-comprehend its “own” tradition and its specific form(s) of culture. At the same time, it offers an example of how different cultures and traditions can be both preserved and developed in their reciprocal action. More in general, it advances the philosophical debate beyond cultural enclosures and beyond mere scholasticism. The phenomenological tradition has always been open to new and alien ideas. An encounter with Japanese philosophy can offer a new challenge to actual phenomenological thinking.

Shigeru Taguchi (Ph.D., Bergische Universität Wuppertal) is Professor of Philosophy at Hokkaido University, Japan. He is author of Das Problem des ‘Ur-Ich’ bei Edmund Husserl (Springer, 2006) and co-editor of Perception, Affectivity, and Volition in Husserl’s Phenomenology (Springer, 2017). His main research topics are Husserlian phenomenology and modern Japanese philosophy. He is also engaged in interdisciplinary studies on consciousness and cognition. He is a member of the Editorial or Advisory Board of journals and book series including Contributions to Phenomenology, Journal of Japanese Philosophy, and Journal of World Philosophies.