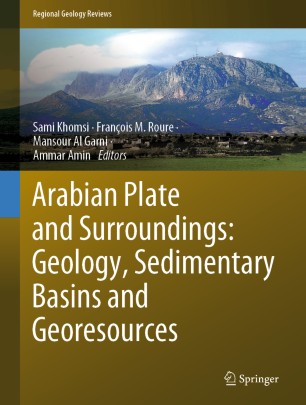 This book focuses on the evolution of sedimentary basins of the Arabian Plate and its surroundings. Because these sedimentary basins developed in various tectonic settings, from extensional or transtensional to flexural, transpressional or compressional, their sedimentary sequences provide unique records of the regional geology.

Georesources of the Arabian Plate are also described here, including petroleum potential, reservoirs, water resources, fresh water and deep saline aquifers, as well as materials and ore deposits. The book is made by a set of papers authored by geoscientists working in both academia and industry. Numerous chapters describe  some regional important geologic features and selected sedimentary basins from the Middle East, North Africa and the Arabian Peninsula domains. Other chapters focus on georesources. A particular focus is given to the geology of Saudi Arabia.

This book is an important contribution to the geology of the Arabian Peninsula and its surroundings. In view of the strategic and economic importance of the regional geology and georesources of the Arabian Plate and Surroundings, this volume will constitute an important reference for a wide range of geoscientists interested in the geology of this region, especially those active in petroleum geosciences and related industry. Ultimately, readers will discover important thematic maps in this book.

Sami Khomsi is a structural-petroleum geologist.  He got his Phd at Tunis University in 2004 and his HDR (Habilitation à Diriger des Recherches) in the same university in 2015. Since 2011, he works in the Department of petroleum geology and sedimentology, and in the Geoexploration department in the faculty of Earth Sciences, King Abdulaziz University, Jeddah, Saudi Arabia. He worked also in different universities in Tunisia and France.
Past employment within academia (research and teaching) and industry in the exploration activities: involved in many  international programs, regional exploration assets, regional synthesizes, sites survey, prospects evaluation and professional expert training (field trip leader for professionals, coaching of geoscientists...) in basin analysis involving basin modeling, structural analysis and balanced cross sections. Sami collaborated with major oil companies in Eastern Maghreb on field studies, structural analysis of fold-thrust structures, subsurface reservoir characterizations and seismic interpretations. He has also experience in geophysical methods involving fast processing and interpretation of seismic reflexion sections in terms of structural geology-investigation- evaluation of plays, characterization of fractured reservoirs and subsurface mapping.
His main research interests: Geometry, kinematics and dynamics of fold-thrust systems and foreland basins in North Africa, Middle East and the Mediterranean realm, fractured reservoir analogues, applying structural analysis and subsurface techniques in the characterizations of drillable structures and structural evaluation of traps using regional cross sections at large scale as well as structural subsurface based on regional seismic reflection profiles in different basins.
https://www.scopus.com/authid/detail.uri?authorId=16175410900
François Roure was trained at the ENS in St-Cloud in France. He got his Ph.D. at Paris VI University in 1979 and his “thèse d’état” in 1984 at the same university, dealing with the geodynamic evolution of the North American Cordillera in northern California and Oregon during the Mesozoic. After 4 years spent with CNRS (1980–1984), he joined the French Institute of Petroleum (IFP) in 1984, and was still senior geosciences advisor at IFP Energies nouvelles (http://www.ifpenergiesnouvelles.fr), the current name of former IFP, from 2000 to 2016, extraordinary professor at the University of Utrecht, the Netherlands, from 2012 to 2016, and member of the CNE2 (French assessment board for research and the studies into the management of radioactive waste and materials, http://www.cne2.fr) from 2010 to 2016. Together with Magdalena Scheck-Wenderoth from GFZ, François was also leading from 2005 till 2015 the Task Force 6 on Sedimentary basins from the International Lithosphere Program (ILP, with support form IUGS and IUGG, http://www.scl-ilp.org/).
Until 1995, his main research topic was the crustal architecture of the Alps and Pyrenees (Ecors program), and the petroleum systems of foreland fold-and-thrust belts in the Apennines, Carpathians, Albania, Sicily, Alaska and Venezuela. After a sabbatical year spent at the USGS in Menlo-Park, California (1994–1995), François initiated numerous international joint industry projects for reservoir appraisal (SubTrap, Sub-thrust reservoir appraisal) in the Himalayan foothills in Pakistan, in sub-Andean basins in Venezuela and Colombia, as well as in the North American Cordillera (Mexico and Canadian Rockies). More recently, he was also involved in the study of the crustal architecture of the Northern Emirates and North Algeria (Tellian and offshore domains).
• Charles Jacob prize from the French Academy of Sciences (1996)
• Distinguished Lecturer for the AAPG (1998)
• Alfred Wegener prize from the EAGE (2010)
• André Dumont medal from Geologica Belgica (2012)
Prof. Dr. Mansour A. Al-Garni received a BS (1993) in geophysics from King Abdulaziz University (KAU), Saudi Arabia, an MS (1996) in geophysics from Colorado School of Mines (CSM), Golden, Colorado, United States (USA), and a PhD (2001) in geophysics from Texas A&M University (TAMU), College Station, Texas, United States (USA).  In 1993, he worked as a geophysicist at the Ministry of Petroleum and Mineral Resources, United States Geological Survey (USGS), Jeddah, Saudi Arabia, and as a demonstrator of geophysics at KAU, where in 2002 he became an assistant professor of geophysics. He has been promoted to an associate professor of geophysics in 2006 and then promoted to a full professor of geophysics in 2010. Furthermore, he has been assigned as the chairman of geophysics department (2003-2011), vice dean (2014), and vice dean for graduate studies and scientific research as well as the chairman of the geoexploration department (2015-2018). Recently, he joined the Ministry of Environment, Water and Agriculture (MEWA) as an advisor as well as the deputy general director for the National Center for Water Research and Studies (NCWRS).  His research interests are controlled-source electromagnetic induction, electrical methods, gravity and magnetic methods, near-surface applied geophysics, forward and inverse modeling, environmental & engineering geophysics, environmental site characterization, ground penetrating radar, hydrogeophysics, and mining geophysics: theory, data processing and interpretation. Prof. Al-Garni has reviewed hundreds of academic works and has been in many committees including those of M.Sc and Ph.D examinations.  His remarkable efforts in the establishment and development of various projects have been reflected in valuable academic and professional successes and achievements.  He has conducted more than 15 research projects, the most recent of which involved electromagnetic (EM), direct-current (DC) resistivity, self-potential (SP), induced polarization (IP), and magnetic methods for mineral exploration in the Arabian Shield, Saudi Arabia.  He has published more than 50 research articles in international indexed and refereed journals. In 2015, Prof. Al-Garni joined the AJGS as Associate Editor where he is responsible for evaluating submission in the fields of theoretical and applied exploration geophysics.  Prof. Al-Garni has been listed in the "Marquis Who's Who in the World" as one of the world's foremost achievers in the field of geophysics in the 28th Edition (2011).

Ammar Amin, professor of Geological Hazards got his Phd at East Anglia University, U.K. August 1994. Since 2010, he works as a Dean of the faculty of Earth Sciences, King Abdulaziz University (KAU) , Jeddah, Saudi Arabia. During his career in KAU he had involved in several administrative and academic positions. He worked as vice dean for development, vice dean for postgraduate studies, head of geoengineering department, KAU Supervisor General of the Co-supervision of Graduate Studies, Chairman of KAU central laboratories.  Currently in addition to his responsibility as a dean, he is a member of several important committees such as KAU Scientific Council and KAU Council. Prof. Ammar collaborated with major institutions within Saudi Arabia and the globe on earth sciences studies, academic development, accreditation, scientific donations, communities services programs, e-learning and female Co-supervision of Graduate Studies. He has also experience in Engineering Geology for roads, bridges, dams, tunnels, environmental regulations and evaluate disaster plans, environmental geological hazards and cracks resulting from the melting of ground limestone.